Someone Comes to Town, Someone Leaves Town: A Novel (Paperback) 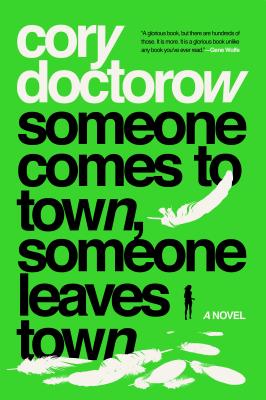 Alan is a middle-aged entrepeneur who moves to a bohemian neighborhood of Toronto. Living next door is a young woman who reveals to him that she has wings—which grow back after each attempt to cut them off.

Alan understands. He himself has a secret or two. His father is a mountain, his mother is a washing machine, and among his brothers are sets of Russian nesting dolls.

Now two of the three dolls are on his doorstep, starving, because their innermost member has vanished. It appears that Davey, another brother who Alan and his siblings killed years ago, may have returned, bent on revenge.

Under the circumstances it seems only reasonable for Alan to join a scheme to blanket Toronto with free wireless Internet, spearheaded by a brilliant technopunk who builds miracles from scavenged parts. But Alan's past won't leave him alone—and Davey isn't the only one gunning for him and his friends.

Whipsawing between the preposterous, the amazing, and the deeply felt, Someone Comes to Town, Someone Leaves Town is unlike any novel you have ever read.

Cory Doctorow is a regular contributor to the Guardian, Locus, and many other publications. He is a special consultant to the Electronic Frontier Foundation, an MIT Media Lab Research Associate and a visiting professor of Computer Science at the Open University. His award-winning novel Little Brother and its sequel Homeland were a New York Times bestsellers. His novella collection Radicalized was a CBC Best Fiction of 2019 selection. Born and raised in Canada, he lives in Los Angeles.

“I know many science fiction writers engaged in the cyber-world, but Cory Doctorow is a native...We should all hope and trust that our culture has the guts and moxie to follow this guy. He's got a lot to tell us.” —Bruce Sterling on Cory Doctorow

“Utterly contemporary and deeply peculiar-a hard combination to beat (or, these days, to find).” —William Gibson, author of Neuromancer, on Eastern Standard Tribe

“Doctorow throws off cool ideas the way champagne generates bubbles...[he] definitely has the goods to be a major player in postcyberpunk science fiction. His ideas are fresh and his attitude highly engaging.” —San Francisco Chronicle on Down and Out in the Magic Kingdom

“Artful and confident...Like William Gibson and Bruce Sterling, Doctorow has discovered that the present world is science fiction, if you look at it from the right angle.” —Vancouver Sun on Eastern Standard Tribe

“Doctorow peppers his novel with technology so palpable you want to order it up on the web. You'll probably get the chance. But technology is not the point here. What is unexpected, shocking even, is how smart Doctorow is when it comes to the human heart, and how well he's able to articulate it....He seems smart because he makes the reader feel smart. When Doctorow talks, when Art argues, we just get it. There's nothing between the language and the meaning. The prose is funny, simple and straightforward. This is a no-BS book.” —NPR on Eastern Standard Tribe