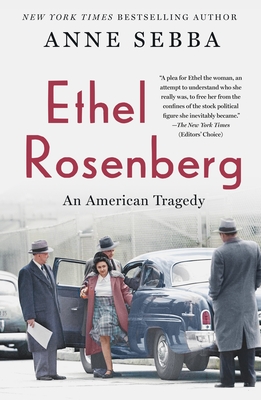 In June 1953, Julius and Ethel Rosenberg, a couple with two young sons, were led separately from their prison cells on Death Row and electrocuted moments apart. Both had been convicted of conspiracy to commit espionage for the Soviet Union, despite the fact that the US government was aware that the evidence against Ethel was shaky at best and based on the perjury of her own brother.

This book is the first to focus on one half of that couple in more than thirty years, and much new evidence has surfaced since then. Ethel was a bright girl who might have fulfilled her personal dream of becoming an opera singer, but instead found herself struggling with the social mores of the 1950’s. She longed to be a good wife and perfect mother, while battling the political paranoia of the McCarthy era, anti-Semitism, misogyny, and a mother who never valued her. Because of her profound love for and loyalty to her husband, she refused to incriminate him, despite government pressure on her to do so. Instead, she courageously faced the death penalty for a crime she hadn’t committed, orphaning her children.

Seventy years after her trial, this is the first time Ethel’s story has been told with the full use of the dramatic and tragic prison letters she exchanged with her husband, her lawyer and her psychotherapist over a three-year period, two of them in solitary confinement. Hers is the resonant story of what happens when a government motivated by fear tramples on the rights of its citizens.

ANNE SEBBA is a prize-winning biographer, lecturer, and former Reuters foreign correspondent who has written several books, including That Woman and Les Parisiennes. A former chair of Britain’s Society of Authors and now on the Council, Anne is also a Senior Research Fellow at the Institute of Historical Research. She lives in London.

“[A] riveting biography...thanks to Sebba’s marvelously gripping narration, we encounter a raft of pivotal individuals — familial and jurisprudential, obscure and politically prominent — arrayed to save Ethel or, on the opposing side, determined to hasten her demise....Ethel Rosenberg is richly illustrated, adding to the authenticity and vigor of Sebba’s densely peopled narrative. This is not just history, but a cautionary tale.” –Washington Independent Review of Books

“In the end, the book is a plea for Ethel the woman, an attempt to understand who she really was, to free her from the confines of the stock political figure she inevitably became.” –The New York Times, Editor's Choice

“A compassionate account of Ethel’s character as a wife and mother...an engrossing narrative.” –The San Francisco Chronicle

“A redefining and redemptive work of astute protest and caution.” –Booklist (starred)

"Riveting...Could there be a better time to review 'what can happen when fear, a forceful and blunt weapon in the hands of authority, turns to hysteria and justice is willfully ignored'? A concise yet thorough account of a 1953 miscarriage of justice with alarming relevance today." --Kirkus Reviews (starred)

"Anne Sebba’s brilliant, unforgettable biography is the story of a woman who fell victim to a fatal cocktail of prejudices...superbly written." --The Jewish Chronicle

"Sebba has dug deep beneath this famous and archetypically male story of spying, weapons and international tensions to give us an intelligent, sensitive and absorbing account of the short, tragic life of a woman made remarkable by circumstance." --The Guardian (UK)

"Sebba’s riveting reappraisal not only includes previously unseen letters and testimony but also manages to extract Ethel from her marriage...this important and compelling book raises resonant issues around what happens when collective fear leads to hysteria and justice is wilfully ignored." --The Spectator (UK)

"Sebba, well known for her biographies of Wallis Simpson and Mother Teresa, makes the case for the defence with exemplary clarity...gets her readers under the skin of both Ethel and her era." --The Telegraph (UK)

"Timely, superbly written and ultimately devastating, this is an American tragedy indeed. I don’t think I’ve ever read a book that has moved me more.” –Anthony Horowitz, New York Times bestselling author of The Magpie Murders and The Sentence is Death

“Sebba cuts through the historical myths and distortions to reveal the real Ethel, a pawn in the Cold War, who simply longed to be a loving mother and a singer. It is a wrenching story of the corruption of justice by influence, ambition, and fear—how powerless we are when no one wants to hear the truth.” –Nancy Thorndike Greenspan, author of Atomic Spy: The Dark Lives of Klaus Fuchs

“An almost unbearably terrible story. I was completely held, absorbed and involved with the story of Ethel’s short life. Brilliant…could not be bettered.” – Claire Tomalin, critically acclaimed editor and author of A Life of My Own: A Memoir and biographer of Jane Austen and Samuel Pepys

“Absolutely gripping in so many ways; beautifully written and superbly researched, a brilliant and a fresh take on a famous case…a Shakespearean tragedy of a woman and family betrayal.” –Simon Sebag Montefiore, bestselling author of The Romanovs

“A soaring story that challenges on so many levels. Anne Sebba has an uncanny knack of upending historical orthodoxies in compelling style…a shocking tale of betrayal, naivety, misogyny and judicial failure. As a woman who maybe loved too well, she remains hard to like but she's even harder to condemn.” –Sonia Purnell, bestselling author of A Woman of No Importance

“Riveting…As Sebba shows to scathing effect, with a message that will strike contemporary nerves, Ethel placed truth above fake news, and being a good wife and mother above being a good Communist. She had wanted to be an opera singer, but here she sings out for all women who have been misunderstood and wronged, and refuse to bow down.” –Nicholas Shakespeare, prize-winning biographer and author of Priscilla: The Hidden Life of an Englishwoman in Wartime France

“A tragic and gripping tale, scrupulously documented, of political chicanery, family betrayal and legal perfidy, Anne Sebba's book has unnerving echoes in the modern world.” –Caroline Moorehead, bestselling author of A Train in Winter and Gelhorn: A Twentieth-Century Life

“Masterful, original and painfully gripping, a historic miscarriage of justice laid bare for our times.” –Philippe Sands, author of The Ratline and East West Street

“This shattering story of a courageous woman swept up in one of America’s greatest miscarriages of justice is enthralling and deeply moving. With her usual brilliance, Anne Sebba has brought to light the real person buried under decades of propaganda and has finally succeeded in humanising Ethel Rosenberg. This book is hugely relevant today, it shows us the perils of allowing ideology and hysteria to take precedence over justice. This is a magnificent work, meticulously researched and skillfully crafted.” – Ariana Neumann, bestselling author of When Time Stopped

“This is a magnificent book, one with a hundred strands, woven together with such skill…Sebba’s exceptional research finally presents us with the real, loving human being.”—Carmen Callil, bestselling author of Bad Faith and founder of Virago Press

“Ethel and Julius Rosenberg - executed by the United States at the height of the Cold War, subject of heated speculation ever since. Was Ethel innocent? Was she betrayed by those who should have loved her? Did the government know it as killing the wrong woman even as it strapped her to that chair? Anne Sebba, a masterful storyteller, peels away the layers of historical and sometimes deliberate misinformation to reveal the extraordinary truth. This book will haunt me for some time.” –Anita Anand, journalist and author of The Patient Assassin