Plaintiff in Chief: A Portrait of Donald Trump in 3,500 Lawsuits (Hardcover) 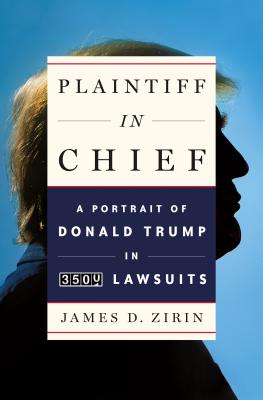 By James D. Zirin
$28.99
Possibly out of print. Email or call to check availability and price.

Unlike all previous presidents who held distinguished positions in government or the military prior to entering office, Donald Trump's political worldview was molded in the courtroom. He sees law not as a system of rules to be obeyed and ethical ideals to be respected, but as a weapon to be used against his adversaries or a hurdle to be sidestepped when it gets in his way. He has weaponized the justice system throughout his career, and he has continued to use these backhanded tactics as Plaintiff in Chief.

In this book, distinguished New York attorney James D. Zirin presents Trump's lengthy litigation history as an indication of his character and morality, and his findings are chilling: if you partner with Donald Trump, you will probably wind up litigating with him. If you enroll in his university or buy one of his apartments, chances are you will want your money back. If you are a woman and you get too close to him, you may need to watch your back. If you try to sue him, he's likely to defame you. If you make a deal with him, you had better get it in writing. If you are a lawyer, an architect, or even his dentist, you'd better get paid up front. If you venture an opinion that publicly criticizes him, you may be sued for libel.

A window into the president's dark legal history, Plaintiff in Chief is as informative as it is disturbing.

JAMES D. ZIRIN a former Assistant United States Attorney for the Southern District of New York, where he served in the Criminal Division under the legendary Robert Morgenthau. His writing has appeared in major periodicals such as Forbes, the LA Times, the London Times, the Washington Times, the Nation, and the New York Law Journal. He is a member of the Council on Foreign Relations. A graduate of Princeton University, Zirin received his law degree from the University of Michigan Law School.

“One of the most useful and readable accounts of Trump’s early career in business…Zirin’s book is a valuable guide to Trump’s mind-set and a good primer for the months ahead as a series of investigations close in on the president.”
—David Fahrenthold, Washington Post

“Plaintiff in Chief captures the enigmatic qualities of a president who has, at turns, sought to bludgeon his enemies through the courts, even while disparaging the rule of law tenets on which our democracy stands. A compelling and insightful must-read.”
—Anthony W. Crowell, Dean and President, New York Law School

“Like a careful lawyer who knows how to enthrall a jury, Jim Zirin delivers a vivid page-turner that spans the angry, vituperative, mean-spirited, litigious life of Donald Trump.”
—Ken Auletta, author and columnist, The New Yorker

“Since becoming president, Donald Trump has shown a disturbing, but so far unrealized, inclination to use the justice system for political revenge. Plaintiff in Chief documents the honing of that instinct during Trump’s decades-long obsession with litigation as a weapon of financial and reputational war.”
—Heather MacDonald, author, The Diversity Delusion

“This book is a first: a presidential biography gleaned through hundreds of law suits, settlements and disregard for the courts. Here it all is, the crucial guide to an American kleptocrat’s anti-legal obstructions of justice, money laundering enterprises, alliances with mob bosses and bully boy tactics, taught by his mentor Roy Cohn. Jim Zirin has written a meticulously researched true crime thriller.”
—Marie Brenner, writer-at-large, Vanity Fair

“Donald Trump’s perverted manipulation of the law to serve his twisted ends is laid out as never before in Jim Zirin’s splendid new book. It’s an essential read for anyone who wants to really understand Trump.”
—Bob Herbert, author and filmmaker, former op-ed columnist, New York Times

“This examination of Donald Trump in litigation is a fascinating and riveting revelation of the calculating character and take no prisoners approach of our President.”
—Joseph A. Califano, Jr., attorney and Chief Domestic Aide to President Lyndon B. Johnson

“James Zirin knows Trump's legal history inside out, and he makes sense of it in this lucid book, as only a brilliant veteran lawyer can. Is Roy Cohn's malevolent spirit running the White House? Zirin shows us how terribly real that nightmare might be.”
—Sean Wilentz, professor, Princeton University

“Zirin advances the proposition that you can learn everything you need to know about Trump from the way he conducted himself in court—and that in fact he became the Trump we know today through his participation in some 4,000 lawsuits…Zirin has proven his case beyond a reasonable doubt.”
—Max Boot, Senior Fellow, Council on Foreign Relations, Washington Post columnist, CNN commentator

“President Trump regards the law as a weapon to be used for his own gain, not an ideal to be respected. In his great book, Plaintiff in Chief, James Zirin traces the origin of Trump's view through a multitude of lawsuits. It is a definitive history of what led us to a lawless presidency.”
—Corey Brettschneider, professor, Brown University

“James Zirin has had an essential insight: if you want to understand the 45th President of the United States, you should start with the 3,500 lawsuits he's been enmeshed in. Donald Trump thrives on litigation: he gets sustenance from it, he gets pleasure. And his life's story can be told through arranging and recreating them. This is a brilliant book that could only have been written by someone like Zirin—a man with a long history as a lawyer, a prosecutor, a journalist, and a New Yorker. It's an absolutely marvelous read.”
—Nicholas Thompson, editor-in-chief, Wired

"A unique approach to the continuing deconstruction of the Trumpian edifice. Former federal prosecutor Zirin pieces together a highly damning portrait of Donald Trump as a serial abuser of the law. The book is so incriminating not only because of the author's credentials, but also because the details are grounded in lawsuits filed by Trump, against Trump, or, in some instances, cross-filed by the opposing parties."
—Kirkus Review

“Zirin is to be commended on a fully referenced and readable book in which his own sense of commitment to the rule of law, and disapproval of what he describes, are palpable.”
—Lord Mance, London Times