The Folly and the Glory: America, Russia, and Political Warfare 1945–2020 (Paperback) 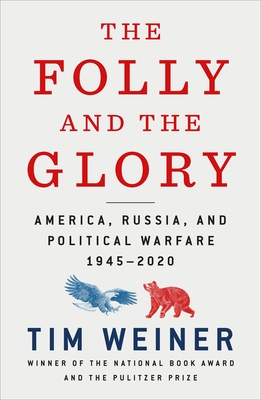 From Tim Weiner, winner of the Pulitzer Prize and the National Book Award, an urgent and gripping account of the 75-year battle between the US and Russia that led to the election and impeachment of an American president

With vivid storytelling and riveting insider accounts, Weiner traces the roots of political warfare—the conflict America and Russia have waged with espionage, sabotage, diplomacy and disinformation—from 1945 until 2020. America won the cold war, but Russia is winning today. Vladimir Putin helped to put his chosen candidate in the White House with a covert campaign that continues to this moment. Putin’s Russia has revived Soviet-era intelligence operations gaining ever more potent information from—and influence over—the American people and government. Yet the US has put little power into its defense. This has put American democracy in peril.

Weiner takes us behind closed doors, illuminating Russian and American intelligence operations and their consequences. To get to the heart of what is at stake and find potential solutions, he examines long-running 20th-century CIA operations, the global political machinations of the Soviet KGB, the erosion of American political warfare after the cold war, and how 21st-century Russia has kept the cold war alive. The Folly and the Glory is an urgent call to our leaders and citizens to understand the nature of political warfare—and to change course before it’s too late.

Tim Weiner has won the Pulitzer Prize and the National Book Award for his reporting and writing on national security and intelligence. He covered the CIA, the war in Afghanistan, and crises and conflicts in fourteen nations for The New York Times. Weiner has taught history and writing at Princeton and Columbia. The Folly and the Glory is his sixth book.

"The Folly and the Glory is a riveting spy thriller made all the more chilling because thanks to Tim Weiner's meticulous reporting, it is all true. Anyone trying to understand the current tensions between the U.S. and Russia over election interference and much else needs to read this fascinating history."
—Jane Mayer, author of Dark Money: The Hidden History of the Billionaires Behind the Rise of the Radical Right

“A well-written and provocative journey to this era’s perilous fight…And Weiner is especially adept at unearthing and explaining the covert side of it all….as a summation, The Folly and the Glory is brilliant.”
—The Washington Post

“A sweeping, lively survey of the worldwide competition between the Soviet Union (and later, Russia) and the United States since the end of World War II. Weiner has, in abundance, the knowledge and experience required to write such a book… [he] skillfully shows that subversion, the dissemination of disinformation and military interventions were standard fare in the competition between Moscow and Washington, and he enlivens his story with vivid portraits of the main characters…informative and entertaining.”
—The New York Times Book Review

“[A] colorful and richly detailed account…Weiner briskly relates a treasure trove of declassified material from the Cold War and draws on insider accounts to present a plausible portrait of the current state of affairs. Newshounds and espionage fans will be enthralled.”
—Publishers Weekly

“In this fraught, globally consequential 2020 campaign season, one could hardly ask for a better explanation of how we landed here.”
—Booklist, *starred review*

"[Weiner] expertly profiles our history of political warfare against the Soviet Union during the Cold War…the pages turn quickly…[a] fascinating read, not only from its historical perspective, but also in how it reminds us that conflict with our adversaries and enemies begins long before the first shot is fired.”
—The Cipher Brief

“In his beautifully written book, Pulitzer Prize-winning author Tim Weiner…traces the history of Russian political warfare…Wiener details how these [active] measures have been used since WWII up through today’s Internet-savvy operation of Vladimir Putin. Underlying this mega-effort is a basic tenet: that things are not what they are, but rather what you can make them seem to be…Weiner gives equal attention to US political warfare…as Weiner notes, elections alone do not a democracy make.”
—Kathleen C. Bailey, Comparative Strategy

“The Folly and the Glory is a wake-up call to the nation about the threat from Russia. This book details the seventy-five-year battle between the United States and Russia—the success and the failures. As a former Director of the CIA and Secretary of Defense, I can attest to the reality of the political warfare. The most sobering conclusion is that we may be in danger of losing that war.”
—Leon E. Panetta, chairman of the Panetta Institute for Public Policy and former Secretary of Defense

“How has Russia gained the upper hand in the decades-long political warfare between our two countries? The Folly and the Glory deals with that terrifying question, perhaps the most important national security issue facing the United States. Tim Weiner has unique insights about this struggle, achieved through thirty-five years of reporting and writing.”
—the Honorable William Perry, former Secretary of Defense

"Weiner makes a riveting if bleak argument that the United States mishandled the collapse of Soviet-style communism, and now we’re reaping the consequences."
—HistoryNet

"In its shadowy, often shocking, political warfare against the Soviet Union, America was often one step behind. Now it is losing ground to Russia. American democracy is teetering on the precipice -- and The Folly and the Glory is critical to understanding how Putin and his political warriors have brought us to the brink."
—Asha Rangappa, Yale University's Jackson Institute for Public Affairs and former FBI special agent

"With wit, wisdom, and passion, Tim Weiner, a brilliant investigative historian, chronicles the wild and unsettling tale of the covert political warfare that has transpired between the United States and Russia during and after the Cold War—a clandestine clash that Moscow ultimately won with its successful attack on the 2016 election. The Folly and the Glory is a gripping and alarming page-turner revealing harrowing stories of skulduggery, subterfuge, and malice—and a clear and compelling warning that American democracy is threatened by enemies abroad and their witting and unwitting allies at home."
—David Corn, co-author of Russian Roulette: The Inside Story of Putin's War on America and the Election of Donald Trump

“Tim Weiner, our most intrepid historian of national security’s dark secrets, pulls off another triumph with The Folly and the Glory, a fast-paced and revelatory chronicle showing that the Kremlin’s campaign to subvert American democracy is but the latest chapter in a struggle that began with the Cold War—and the blowback to the type of ‘political warfare’ that the U.S. invented.”
—Fred Kaplan, author of The Bomb: Presidents, Generals, and the Secret History of Nuclear War and Dark Territory: The Secret History of Cyber War

“There is no bigger or more consequential modern history than this. Writing with his inimitable fierce, forceful urgency, Tim Weiner traces the eye-opening and astounding story of 75 years of shadow conflict between the US and Russia, from murder plots in the jungles of Congo to jazz in Poland to the Democratic Party's servers in 2016. This book will stand alongside works like Evan Thomas and Walter Issacson's The Wise Men and Robert Gates' From The Shadows as the essential histories of the Cold War, a war that as Weiner outlines, never really ended in Russia's eyes."
—Garrett M. Graff, author of the New York Times bestseller The Only Plane in the Sky