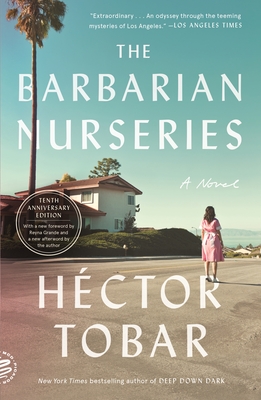 With The Barbarian Nurseries, Héctor Tobar gives our most misunderstood metropolis its great contemporary novel, taking us beyond the glimmer of Hollywood and deeper than camera-ready crime stories to reveal Southern California life as it really is, across its vast, sunshiny sprawl of classes, languages, dreams, and ambitions.

Scott and Maureen Torres-Thompson have always relied on others to run their Orange County home. But when bad investments crater their bank account, it all comes down to Araceli, their somewhat prickly Mexican maid. One night, an argument between the couple turns physical, and a misunderstanding leaves the children in Araceli’s care. Their parents unreachable, she takes them to central Los Angeles in the hopes of finding Scott’s estranged Mexican father—an earnest quest that soon becomes a colossal misadventure, with consequences that ripple through every stratum of the sprawling city. Héctor Tobar’s The Barbarian Nurseries is a masterful tale of contemporary Los Angeles, a novel as alive as the city itself.

Héctor Tobar is a Pulitzer Prize–winning journalist and novelist. He is the author of the critically acclaimed, New York Times bestseller, Deep Down Dark, as well as The Barbarian Nurseries, Translation Nation, and The Tattooed Soldier. Héctor is also a contributing writer for the New York Times opinion pages and an associate professor at the University of California, Irvine. He's written for The New Yorker, The Los Angeles Times and other publications. His short fiction has appeared in Best American Short Stories, L.A. Noir, Zyzzyva, and Slate. The son of Guatemalan immigrants, he is a native of Los Angeles, where he lives with his family.

Reyna Grande is the author of several books, including the bestselling memoir The Distance Between Us, where she writes about her life before and after she arrived in the United States from Mexico as an undocumented child immigrant, and the much-anticipated sequel, A Dream Called Home. She also co-edited an anthology by and about undocumented Americans called Somewhere We Are Human: Authentic Voices on Migration, Survival, and New Beginnings. Her books have been adopted as the common read selection by schools, colleges and cities across the country.

“Tobar exhibits a seismographic sensitivity to the tensions along the fault lines of his cultural terrain....His illuminations become our recognitions.” —The New York Times Book Review

“Each moment surprises....Darkly hilarious and moving.” —The Washington Post

“That Tobar is so evenhanded, so compassionate, so downright smart, should place The Barbarian Nurseries on everyone's must-read list.” —The Seattle Times