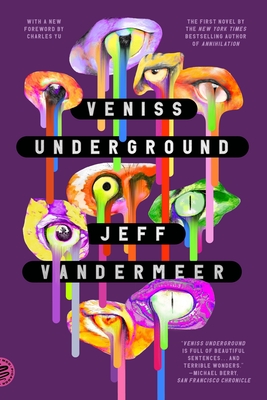 From the New York Times bestselling author of Annihilation, Jeff VanderMeer’s first novel, Veniss Underground, takes readers on a journey to a labyrinthine city of tunnels, and the dangers lurking behind each turn. This paperback edition features the bonus novella “Balzac’s War.”

In a dark and decadent far future, the city of Veniss persists beside a dead ocean. Earth has become a desert wasteland ravaged by climate change. Veniss endures on the strength of its innovative tech of almost Boschian intensity, but at what cost? Where does the line between “made creature” and “person” lie?

Against this backdrop, Veniss Underground spins the tale of Nicholas, an aspiring, struggling Artist; his twin sister, Nicola; and Shadrach, Nicola’s former lover. A fateful trip by Nicholas to the maverick biotech Quin will have far-reaching consequences for all three—and for the fate of Veniss itself, as insurrection stirs and the oppressed begin to revolt.

Veniss Underground is Jeff VanderMeer’s first novel, a spectacular surreal foray into a world as influenced by Alejandro Jodorowsky as by Ursula K. Le Guin. Readers of VanderMeer’s later work will be enchanted and horrified by the marvels within, including the author’s signature fascination with the nonhuman and the environment. By turns beautiful and powerful, Veniss Underground explores the limits of love, memory, and obsession against a backdrop of betrayal and biological mutation.

This reissue includes a new introduction by the National Book Award–winning author Charles Yu and a bonus story from Jeff VanderMeer.

Jeff VanderMeer is the author of Hummingbird Salamander, the Borne novels (Borne, The Strange Bird, and Dead Astronauts), and The Southern Reach Trilogy (Annihilation, Authority, and Acceptance), the first volume of which won the Nebula Award and the Shirley Jackson Award and was adapted into a movie by Alex Garland. He speaks and writes frequently about issues relating to climate change as well as urban rewilding. He lives in Tallahassee, Florida, on the edge of a ravine, with his wife, Ann VanderMeer, and their cat, Neo.