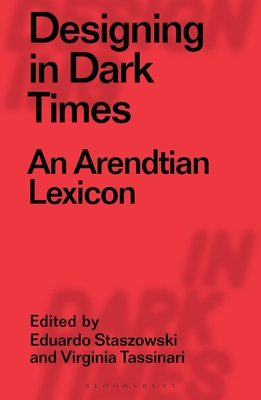 The architectural historian and critic Kenneth Frampton 'never recovered' from the force of Hannah Arendt's teaching at The New School in New York. The philosopher Richard J. Bernstein considers her the most perceptive political theorist and observer of 'dark times' (a concept which, drawing from Brecht, she made her own).

Building on the revival of interest in Hannah Arendt, and on the increasing turn in design towards the expanded field of the social, this unique book uses insights and quotations drawn from Arendt's major writings (The Human Condition; The Origins of Totalitarianism, Men in Dark Times) to assemble a new kind of lexicon for politics, designing and acting today. Taking 56 terms - from Action, Beginnings and Creativity through Mortality, Natality, and Play to Superfluity, Technology and Violence - and inviting designers and scholars of design world-wide to contribute, Designing in Dark Times: An Arendtian Lexicon, offers up an extraordinary range of short essays that use moments and quotations from Arendt's thought as the starting points for reflection on how these terms can be conceived for contemporary design and political praxis. Neither simply dictionary nor glossary, the lexicon brings together designing and political philosophy to begin to create a new language for acting and designing against dark times.

Eduardo Staszowski is Associate Professor of Design Strategies at Parsons School of Design, USA, and Director/co-founder of the Parsons DESIS Lab, USA. Working to enhance participation in policy development and civic design, he studies design as a method and language, and its role as an intermediary, creating, and orienting processes of social innovation and sustainability. Virginia Tassinari is Assistant Professor at LUCA School of Arts, Belgium, where she also founded the LUCA DESIS Lab; Visiting Professor at Politecnico di Milano, Italy, and a design researcher for Pantopicon, an Antwerp-based foresight and design studio. Her research areas are design and philosophy, with a specific focus on design for social innovation, participatory design and design activism.