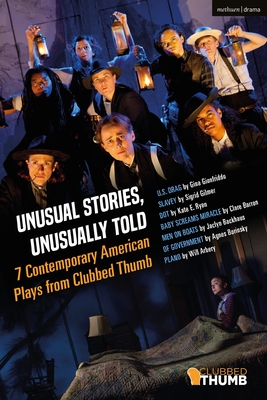 Unusual Stories, Unusually Told celebrates some of the boldest contemporary American voices with seven plays from Clubbed Thumb's Summerworks. Spanning 2001 to 2019 and accompanied by artist interviews and reflections on the work, this anthology presents a vital survey of formally inventive 21st century playwriting, and is a perfect collection for study and performance.

U.S. Drag
by Gina Gionfriddo
A serial killer named Ed stalks the city, luring his victims by asking for help. To protect themselves, a group of New Yorkers form SAFE, "Stay Away From Ed." The first rule: don't help anyone. It's a matter of urban survival. Slavey
by Sigrid Gilmer
In which Robert and Nora, a couple on the rise, get a big promotion, a bigger house, and a brand new slave. Dot
by Kate E. Ryan
In which old Dot and the weird kid from the neighborhood become friends. Set in that kind of Florida town that makes you wonder: is this TV, a book, or maybe even a cabaret? Baby Screams Miracle
by Clare Barron
In which a freak storm knocks down all the trees in town and a prodigal daughter is taught a new way to pray. But the weird weather's not over yet. Men on Boats
by Jaclyn Backhaus
Ten explorers. Four boats. One Grand Canyon. Men On Boats is the true(ish) history of an 1869 expedition, when a one-armed captain and a crew of insane yet loyal volunteers set out to chart the course of the Colorado River. Of Government
by Agnes Borinsky
The adventures of Barb the Teacher, Deb the Seeker, Heidi the Helper, Tawny the Addict and a host of others. With songs Presented by Miss Marjorie Blain, her students, and members of the community. Light refreshments will be provided. Plano
by Will Arbery
Tonight, and later, and earlier, three sisters (no, not those ones) are stricken with a series of strange plagues. Let's talk about family nightmares. I mean, uh, memories.

Will Arbery is a playwright from Texas + Wyoming + seven sisters. His plays include Heroes of the Fourth Turning (Playwrights Horizon, winner Drama Critics Circle for Best New Play, 2019-20), Plano (Clubbed Thumb), Evanston Salt Costs Climbing (New Neighborhood) and Wheelchair (3 Hole Press). He recently won a Whiting Award for Drama, and is currently under commission from Playwrights Horizons and Shadowcatcher Entertainment. He's a member of New Dramatists, The Working Farm at SPACE on Ryder Farm, P73's Interstate 73, Colt Coeur, Youngblood, and an alum of Clubbed Thumb's Early Career Writers Group. His plays have been developed at Clubbed Thumb, Playwrights Horizons, NYTW, The Vineyard, SPACE on Ryder Farm, Ojai Playwrights Conference, Cape Cod Theater Project, The New Group, EST/Youngblood, The Bushwick Starr, Alliance/Kendeda, and Tofte Lake Center. MFA: Northwestern. BA: Kenyon College. Agnes Borinsky is a writer and performer, originally from Baltimore, currently living in Los Angeles. According to one critic, she writes "very light, very weird comedies that cut unexpectedly sharp."Her plays have been produced and developed by Clubbed Thumb, Playwrights Horizons, Target Margin, i am a slow tide, Page 73, Ensemble Studio Theatre, SPACE at Ryder Farm, the University of Pennsylvania, Masrah Ensemble in Beirut, Son of Semele in Los Angeles, Upstream Theater in St. Louis, and the Lower Manhattan Cultural Council. She has written essays on sex, God, politics, art, and gender for n+1, Tablet Magazine, Slate, Bitch, the LA Review of Books, and others. Sasha Masha, her first young adult novel, comes out from Farrar, Straus & Giroux Books for Young Readers in 2020. Jaclyn Backhaus is a playwright, cofounder of Fresh Ground Pepper, and new member of The Kilroys. Her plays include Men On Boats (New York Times Critics' Pick, Clubbed Thumb, Playwrights Horizons, published by Dramatists Play Service), India Pale Ale (Manhattan Theatre Club, recipient of the 2018 Horton Foote Prize for Promising New American Play), Wives (Playwrights Horizons), You Across From Me (co-written with three other writers for the Humana Festival), Folk Wandering (book writer and co-lyricist with 11 composers, Pipeline Theatre Company), and You On the Moors Now (Theater Reconstruction Ensemble), among others. She was the 2016 Tow Foundation Playwright-in-Residence at Clubbed Thumb and she is currently in residence at Lincoln Center. Backhaus holds a BFA in Drama from NYU Tisch, where she now teaches. She hails from Phoenix, Arizona, and currently resides in Ridgewood, Queens with her husband, director Andrew Scoville and their son Ernie. Clare Barron is a playwright and actor from Wenatchee, Washington. Her play Dance Nation was a finalist for the 2019 Pulitzer Prize, the recipient of the 2017 Susan Smith Blackburn award, and previously received the inaugural Relentless Award (2015); the play received its world premiere at Playwrights Horizons in 2018 and ran at the Almeida Theatre in London. Her play You Got Older (2015 Obie award for Playwriting; nominee for 2015 Drama Desk Award for Outstanding New Play; finalist for the 2015 Susan Smith Blackburn Prize) received its world premiere through P73 under the direction of Anne Kauffman and recently ran at Steppenwolf. Her play Baby Screams Miracle was recently produced at Woolly Mammoth Theatre, after having premiered as part of Clubbed Thumb's 2013 Summerworks Festival. Her play I'll Never Love Again was produced at the Bushwick Starr in 2016 and was a New York Times Critics' Pick. She is the recipient of the 2014-2015 Paula Vogel Playwriting Award (Vineyard Theater), the 2014 P73 Playwriting Fellowship; she has received Sloan commissions from MTC and EST, and is also under commission to Lincoln Center Theater, and Playwrights Horizons. Kate E. Ryan is a San Francisco-based playwright, curator, administrator and teacher. She is a member of the OBIE-winning playwrights collective 13P, an Affiliated Artist with Clubbed Thumb, former Co-Curator of the OBIE-winning performance series Little Theatre at Tonic, former Co-Chair of the Soho Rep Writer-Director Lab, and Co-Founder of Machiqq, a women's experimental writing collective. Her work has been developed or produced in the Bay Area by Crowded Fire, The Ground Floor at Berkeley Rep, Just Theater, Playwrights Foundation, and Z Space, and in New York City by Clubbed Thumb, The Flea, The Ontological-Hysteric, Soho Rep, The Vineyard, and Target Margin. Her plays include Bad Guy, Card and Gift, Close to You, Design Your Kitchen, Dot, Everybody's Dad, A Good Neighbor, Mark Smith, Science is Close, and Women of Trachis (an adaptation of the Sophocles play). Her career has received support from sources including the Gerbode-Hewlett Foundations and California's Creative Capacity Fund. She has an MFA from Mac Wellman's program at Brooklyn College where she received a MacArthur Graduate Scholarship. Sigrid Gilmer makes black comedies that are historically bent, totally perverse, joyfully irreverent and are concerned with issues of identity, pop culture and contemporary American society. Her work has been performed at the Skylight Theatre, Pavement Group, Know Theatre of Cincinnati, Cornerstone Theater Company and Highways Performance Space. She is a winner of the Map Fund Creative Exploration Grant, the James Irving Foundation Fellowship and is a USA Ford Fellow in Theatre. Gina Gionfriddo is a two-time Pulitzer Prize finalist for Rapture, Blister, Burn (Playwrights Horizons; Hampstead Theatre in London) and Becky Shaw (Actors Theatre of Louisville's Humana Festival; Second Stage Theatre; Almeida Theatre in London). Her other plays include After Ashley (ATL's Humana Festival; Vineyard Theatre); Can You Forgive Her? at Boston's Huntington Theatre and U.S. Drag (in New York by Clubbed Thumb and the stageFARM.) She has received an OBIE Award, a Guggenheim Fellowship, The Susan Smith Blackburn Prize, an Outer Critics Circle Award, The Helen Merrill Award for Emerging Playwrights, and an American Theatre Critics Association/Steinberg citation. She has written for the television dramas "Law & Order," "Law & Order: Criminal Intent," "Cold Case," "Borgia," "The Alienist," and "House of Cards."