Chess Queens: The True Story of a Chess Champion and the Greatest Female Players of All Time (Hardcover) 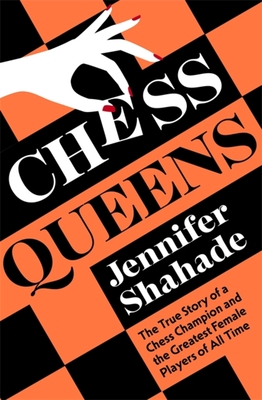 For fans of The Queen's Gambit, this is the real life story of a female chess champion travelling the world to compete in a male-dominated sport with the most famous players of all time.

Jennifer Shahade, a two-time US women's chess champion, spent her teens and twenties travelling the world playing chess. Tournaments have taken her from Istanbul to Moscow, and introduced her to players from Zambia to China. In this ultra male-dominated sport, Jennifer found shocking sexism, as well as an incredible history of the top female players that has often been ignored. But she also found friendships, feminism and hope.

Through her own story as well as in-depth profiles of pioneers of the game, Jennifer invites us into the extremely competitive world of chess. She shows us the rivalry and the camaraderie; the ecstatic highs and the excruciating losses; the glamour and the hard work. She describes the coach who told her that her period will affect her standard of play, and gives us thrilling blow-by-blow accounts of the matches that made history.

Intertwined with Jennifer's own story are those of the top female players from around the world. We meet the famous Polgar sisters, the three Hungarian girls who were all child prodigies; we meet the glamorous jet setters who travel the world partying, and the players who escaped war-torn countries to become champions against the odds.

Chess Queens is a fascinating journey into the exhilarating world of chess and an essential book for all the aspiring chess queens of today.

Jennifer Shahade is an Olympic chess champion, Woman Grandmaster, poker pro, speaker and author. She is a two-time United States women's chess champion and was the first female to win the US Junior Open. She hosts two award-winning podcasts, The Poker GRID and Ladies Knight. Jennifer works to bring more women, girls and gender minorities into the game through programmes like US Chess Women, the Madwoman's Book Club, and a cross-cultural chess club with girls from all the world, from Kenya to Colombia. She is an ambassador for PokerStars and Poker Power, and a board member of the World Chess Hall of Fame. Her previous books include Chess Bitch (now updated and reissued as Chess Queens) and Play Like a Girl!

Amazing. I was transfixed throughout, and learned so much. Chess Queens is a meditation on why women have always been so under-represented in the game, and the remarkable lives of those who played on against the odds. An astoundingly intimate, thoughtful and inspirational book by a person who has seen it all from the inside.—Angela Saini, author of INFERIOR

Like The Queen's Gambit, this isn't really about chess, but power... [Shahade] wants to provoke discussion and show how chess is just a starting point for wider liberation.—The Sunday Times

An intriguing behind-the-scenes insight into the elite world of female competitive chess. Shahade gives us a tour of the history, geography and gender politics of chess, accompanied by the uplifting stories of chess heroines, of triumph after triumph over stunning misogyny and stifling cultural expectations. Chess Queens is an exhilarating read for anyone interested in the highs and lows of competitive games, especially those who are told they don't belong!—Gina Rippon, author of THE GENDERED BRAIN

If you loved The Queen's Gambit you'll love this way more. It's so damn funny and interesting.—Charlotte Clymer, writer and speaker

Jennifer Shahade is a brilliant, insightful thinker who never fails to entertain and engage. I'm always amazed by the novel approach she's able to bring to any intellectual challenge and discussion. She's even made me want to learn to play chess - something I swore I'd never do. Jennifer is a true role model to any woman who has ever thought about taking on the worlds that have traditionally been branded male.—Maria Konnikova, author of THE BIGGEST BLUFF and THE CONFIDENCE GAME

Jennifer's book gives readers an insider look into the complex realities of being a female chess player, while also showcasing the badass women knocking down these barriers. Highly recommended!—Alexandra Botez, chess champion and Twitch streamer

The fascinating true stories of the lives of champion chessplayers. All women should take up the challenge and pick up a board!—Yoko Ono

A wild ride exploring the enchanting true lives of women competing and winning at the world stage. But more captivating than the glamorous jet-setting when we take a deep look inside their vibrant inner lives, revealing what it truly takes to win in a male-dominated field. A book that is so much bigger than chess that by the time you get to the end of it your understanding of the human mind and our world will have changed forever, for the better. I could not put it down.—Yanjaa, memory grandmaster

I have long looked up to Chess Queen Jennifer Shahade, a barrier breaker who has committed to teaching us all to understand chess both as an aesthetic and a sport. Along the way she has shown us a powerful example of what it means to be a feminist, advocate, and artist in the world of chess. If you're hype about women and girls in chess - and you should be - then you're gonna want to grab a copy of Chess Queens—Chanda Prescod-Weinstein, author of THE DISORDERED COSMOS

In pacey and flowing prose, Shahade intertwines episodes and experiences from her own chess career with a chronological account of the greatest female chessplayers starting with Vera Menchik and Sonja Graf. In reading through Shahade's book, I felt something of the same pleasure of discovery as I'd had as a 9-year-old (reading about the great legends of the game). If a young female player gets the same sense of belonging to the chess world through reading this book... it will have made a world of difference.—Matthew Sadler, New In Chess Magazine

Highly engaging ... a tour de force on chess history and its socio-political context. Amid decades of nonsense written about women chess players, this is an authentic, balanced and extremely readable celebration of players who, over the last century or so, have confounded social expectations for their love of the 64 squares—Harriet Hunt, Chess Magazine

I really enjoyed Chess Queens and reading about the triumphs and struggles of women in chess. Jennifer Shahade does an amazing job—Eric Rosen, International Chess Master

With personal anecdotes and punchy vignettes, Jennifer expertly details the (often) onerous journeys women have overcome just to get a seat at the chessboard. Chess Queens is about so much more than a game; it spotlights real people whose determination and success forced the world to improve—Robert Hess, Grandmaster an World Championship commentator