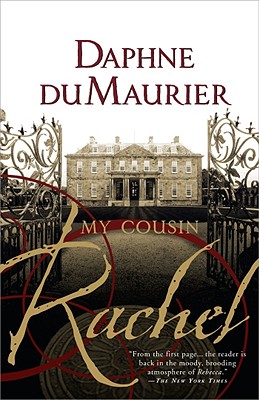 "From the first page...the reader is back in the moody, brooding atmosphere of Rebecca."—The New York Times

From Daphne du Maurier, the legendary author of Rebecca and Jamaica Inn, comes a gothic classic set in beautiful, mysterious, and eerie Cornwall.

Philip Ashley's older cousin Ambrose, who raised the orphaned Philip as his own son, has died in Rome. Philip, the heir to Ambrose's beautiful English estate, is crushed that the man he loved died far from home. He is also suspicious. While in Italy, Ambrose fell in love with Rachel, a beautiful English and Italian woman. But the final, brief letters Ambrose wrote hint that his love had turned to paranoia and fear.

Now Rachel has arrived at Philip's newly inherited estate. Could this exquisite woman, who seems to genuinely share Philip's grief at Ambrose's death, really be as cruel as Philip imagined? Or is she the kind, passionate woman with whom Ambrose fell in love? Philip struggles to understand Rachel's intentions, knowing Ambrose's estate, his future, and his sanity, hang in the balance.

An atmospheric mystery full of doubt and paranoia, My Cousin Rachel is a suspenseful gothic treat for long-time fans and new readers of Daphne du Maurier.

"Miss du Maurier is... a storyteller whose sole aim is to bewitch and beguile. And in My Cousin Rachel she does both, with Rebecca looking fondly over her shoulder."—New York Times

Daphne du Maurier was born in London in 1907, the second daughter of a famous stage actor and actress. Her first novel was published in 1931, but it was her 1938 novel Rebecca which made her one of the most successful writers of her time. Alfred Hitchcock's adaptation of the book won the Best Picture Oscar in 1940, and he used her material again for his classic The Birds. In 1969, Du Maurier was created a Dame of the British Empire.

At the age of 81, Du Maurier died at home in her beloved Cornwall, the region that had been the setting for many of her books.

"IF YOU HAVE NOT HEARD, read this thing." — Books I Done Read

"A taut, well, written story that will no doubt grab you attention and not let it go until the very last page. " — A Lovely Shore Breeze

" I think it's safe to say that I was haunted by this Gothic Tale long after I finished the book. Grade A." — Musings of a Bibliophile

"Do you have books that as soon as you finished reading them, you were sorry the story ended?... My Cousin Rachel by Daphne du Maurier was such a book for me." — Reading Extravaganza

"[I]t is hard to put this story down." — Bookloons.com

"[D]efinitely entertaining and suspenseful." — We Be Reading

"A classic manor mystery in the tradition of the Brontë sisters with a modern psychological twist, My Cousin Rachel is a fine introduction to the sort of refined madness that defines Daphne du Maurier's work. " — Hipster Book Club

"In 1951, du Maurier released My Cousin Rachel and this one is, thus far in our du Maurier reading journey, A Reader's Respite's favorite... another Sourcebook's reprint and boy, are we thankful." — A Reader’s Respite

"The excellent world-building and use of symbolism created a brooding, mysterious atmosphere." — Genre Reviews

"I enjoyed reading My Cousin Rachel. It was intriguing and suspenseful." — Cindy’s Love of Books

"I absolutely loved and enjoyed this novel from start to finish... She is just that good." — The Literate Housewife

"The gothic atmosphere combined with the mystery of who Rachel really is, kept this reader enthralled and turning the pages quickly. " — Passages to the Past

"This is a great read that you won’t want to miss if you enjoy gothic mysteries!" — S. Krishna’s Books

"Filled with gothic suspense this novel will no doubt have you wondering too as to what are Rachel’s real motivations and what will happen to the main characters. I throughly enjoyed this book and the characters." — The Book Girl’s Nightstand

"My Cousin Rachel is a captivating Gothic story that pulses with emotion and dark undercurrents; you don’t want to miss it!" — Book Review by Bobbie