Can't Stand Up For Falling Down: Rock'n'Roll War Stories (Paperback) 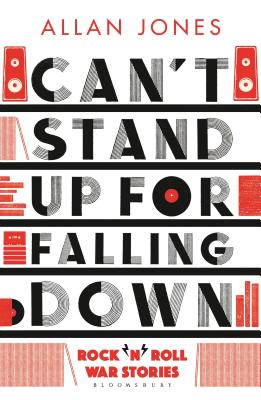 Allan Jones launched Uncut magazine in 1997 and for 15 years wrote a popular monthly column called Stop Me If You've Heard This One Before, based on his experiences as a music journalist in the 70s and 80s, a gilded time for the music press.

By turns hilarious, cautionary, poignant and powerful, the Stop Me...stories collected here include encounters with some of rock's most iconic stars, including David Bowie, Lou Reed, Leonard Cohen, Van Morrison, Neil Young, Elvis Costello, The Sex Pistols, The Clash, The Smiths, R.E.M. and Pearl Jam. From backstage brawls and drug blow-outs, to riots, superstar punch-ups, hotel room confessionals and tour bus lunacy, these are stories from the madness of a music scene now long gone.

Allan Jones is an award-winning British music journalist and editor. In 1974, he applied for a job on the UK's best-selling music paper as a junior reporter, signing off his application with “Melody Maker needs a bullet up the arse. I'm the gun, pull the trigger”. He was editor of Melody Maker from 1984 to 1997 and until 2014 editor of music and film monthly Uncut.

"Encounters of the Crazy Kind." - Victoria Segal, The Sunday Times