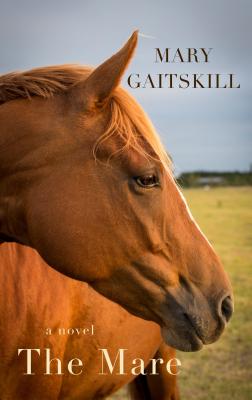 By Mary Gaitskill
$31.99
Possibly out of print. Email or call to check availability and price.

“The Mare is the heart-wrenching story of a young inner-city girl in the Fresh Air Fund program who travels to a host family in upstate New York, where she befriends a frightened and abused racehorse at a nearby stable. Gaitskill navigates the ugly realities of both human and equine abuse, but, ultimately, this is a triumphant novel shaped by authentic characters and in which trust and determination win. Readers will be reminded of how our real-life connections with animals can both guide and heal.”
— Nancy Scheemaker (W), Northshire Bookstore Saratoga, Saratoga Springs, NY

Following her National Book Award nominated "Veronica, "here is Mary Gaitskill's most poignant and powerful work yet the story of a Dominican girl, the Anglo woman who introduces her to riding, and the horse who changes everything for her.
Velveteen Vargas is eleven years old, a Fresh Air Fund kid from Brooklyn. Her host family is a couple in upstate New York: Ginger, a failed artist and shakily recovered alcoholic, and her academic husband, Paul, who wonder what it will mean to make a difference in such a contrived situation. Gaitskill illuminates their shifting relationship with Velvet over several years, as well as Velvet's encounter with the horses at the stable down the road especially with an abused, unruly mare called Fugly Girl. With strong supporting characters Velvet's abusive mother, an eccentric horse trainer, a charismatic older boy who awakens Velvet's nascent passion "The Mare" traces Velvet's journey between the vital, violent world of the inner city and the world of the small-town stable.
In Gaitskill's hands, the timeless story of a girl and a horse is joined with a timely story of people from different races and classes trying to meet one another honestly. "The Mare" is raw, heart-stirring, and original.

MARY GAITSKILL is the author of the story collections "Bad Behavior, Because They Wanted To" (nominated for a PEN/Faulkner Award), and "Don t Cry, " and the novels" Veronica "(nominated for a National Book Award) and "Two Girls, Fat and Thin." She has received a Guggenheim Fellowship, and her work has appeared in "The New Yorker, Harper s, Esquire, The Best American Short Stories, " and "The O. Henry Prize Stories.""