The Violence Project: How to Stop a Mass Shooting Epidemic (Hardcover) 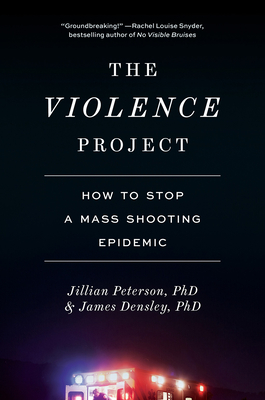 Winner of the 2022 Minnesota Book Award

Using data from the writers’ groundbreaking research on mass shooters, including first-person accounts from the perpetrators themselves, The Violence Project charts new pathways to prevention and innovative ways to stop the social contagion of violence. Frustrated by reactionary policy conversations that never seemed to convert into meaningful action, special investigator and psychologist Jill Peterson and sociologist James Densley built The Violence Project, the first comprehensive database of mass shooters. Their goal was to establish the root causes of mass shootings and figure out how to stop them by examining hundreds of data points in the life histories of more than 170 mass shooters—from their childhood and adolescence to their mental health and motives. They’ve also interviewed the living perpetrators of mass shootings and people who knew them, shooting survivors, victims’ families, first responders, and leading experts to gain a comprehensive firsthand understanding of the real stories behind them, rather than the sensationalized media narratives that too often prevail. For the first time, instead of offering thoughts and prayers for the victims of these crimes, Peterson and Densley share their data-driven solutions for exactly what we must do, at the individual level, in our communities, and as a country, to put an end to these tragedies that have defined our modern era.

Jillian Peterson, PhD, is a professor of criminology and criminal justice at Hamline University. She has led large-scale research studies on mental illness and crime, school shootings, and mass violence. James Densley, PhD, is a professor of criminal justice at Metropolitan State University, which is part of the Minnesota State system. He is known for his international work on gangs, criminal networks, violent extremism, and policing. Based in St. Paul, Minnesota, Jillian and James run The Violence Project, a nonpartisan, nonprofit research center known worldwide for its work on mass shooting prevention. The Violence Project has featured in CNN, Fox News, The New York Times, The Washington Post, The Wall Street Journal, and other leading media outlets.

“This is a thorough, groundbreaking work … A gripping book that will captivate anyone seeking to understand why mass shootings occur and what might be done to recognize and intervene with potential shooters before they act.”
— Library Journal (starred review)

“Insightful and cautiously optimistic ... the authors’ nuanced portraits of mass shooters buttress the case that these tragedies ‘are not an inevitable fact of American life; they’re preventable.’ This is a sensitive and knowledgeable treatment of one of America’s most vexing social problems.”

“A bracing compilation of mass shooter profiles and first-person accounts from violent criminals ... a multifaceted study that is alternately horrifying, depressing, and even hopeful ... A distressing, critical study in the understanding, processing, and prevention of mass-casualty gun violence.”

“[The] book identifies 34 potential solutions to the mass shooting epidemic...[it] focuses on understanding past mass shooters and preventing future ones by showing that our approach to mass shooters is flawed. By painting them as one-dimensional monsters, we avoid society's involvement. And that stops us from solving the problem.”
— Minneapolis Star-Tribune

“Reading The Violence Project is like having the lights turned on in a dark stadium. Jillian Peterson and James Densley illuminate for us the darkest corners of our violent predilections. They’ve told us what to do; the rest is up to us. Groundbreaking!”
— Rachel Louise Snyder

“If you ever wondered how can we stop mass shootings, this is the book for you. By mixing compelling first-person interviews with mass shooters and significant data analysis, The Violence Project illustrates the tangible ways we can intervene and prevent a tragedy from occurring. No one is helpless—read this book and help stop violence before it starts.”
— Nicole Hockley

“It's a reframing of our mass shooting problem, beyond the familiar and mistaken messaging that bullying, video games and undiagnosed mental illness lay at the crux of the crimes....a reminder to open our eyes...It helpfully summarizes de-escalation techniques and it relays four D's of crisis, dangerous, disruptive, dysregulated or distressed behaviors... a courageous deep dive into a topic for public health that most researchers would rather forget.”

“a must read for every school employee... While there is no simple solution to the problem, the book has numerous helpful suggestions, including one for the media. Give only minimal recognition to the shooter by name.”

“A moving book that not only translates the authors’ years of research, but also synthesizes the available literature on mass shootings in an easily digestible, yet compelling format for the lay audience... an essential read.”
— The Academy of Criminal Justice Sciences

"For teachers, business owners, parents, and health care providers, for anyone passionate about gun control laws, or anyone yearning to know more—this text is for everyone.  The Violence Project tells you everything you need to know about the mass shooting epidemic in the United States and offers evidence-based solutions as to how this crisis can be abated. The authors discuss everything from live shooter drills to security products, explaining what works and what doesn’t based upon their extensive research."

“One major advantage of this book over others is that it directly addresses the ‘So what can I do?’ dilemma. Unlike journal articles and books that focus on state or Federal policy efforts, this book offers a three-part approach to prevention. The book recommends steps we can take as individuals, institutions, and as a society. … This book emphasizes concrete action, with links and descriptions of resources that can help facilitation these actions. In doing so, this book gives the reader a sense that mass shootings are preventable if we are willing to take a few basic steps to get started.”
— Crime Prevention and Community Safety