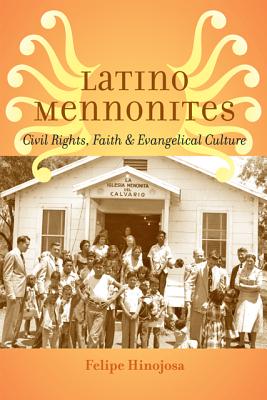 The first historical analysis of the changing relationship between religion and ethnicity among Latino Mennonites.

Felipe Hinojosa's parents first encountered Mennonite families as migrant workers in the tomato fields of northwestern Ohio. What started as mutual admiration quickly evolved into a relationship that strengthened over the years and eventually led to his parents founding a Mennonite Church in South Texas. Throughout his upbringing as a Mexican American evang lico, Hinojosa was faced with questions not only about his own religion but also about broader issues of Latino evangelicalism, identity, and civil rights politics.

Latino Mennonites offers the first historical analysis of the changing relationship between religion and ethnicity among Latino Mennonites. Drawing heavily on primary sources in Spanish, such as newspapers and oral history interviews, Hinojosa traces the rise of the Latino presence within the Mennonite Church from the origins of Mennonite missions in Latino communities in Chicago, South Texas, Puerto Rico, and New York City, to the conflicted relationship between the Mennonite Church and the California farmworker movements, and finally to the rise of Latino evangelical politics. He also analyzes how the politics of the Chicano, Puerto Rican, and black freedom struggles of the 1960s and 1970s civil rights movements captured the imagination of Mennonite leaders who belonged to a church known more for rural and peaceful agrarian life than for social protest.

Whether in terms of religious faith and identity, race, immigrant rights, or sexuality, the politics of belonging has historically presented both challenges and possibilities for Latino evangelicals in the religious landscapes of twentieth-century America. In Latino Mennonites, Hinojosa has interwoven church history with social history to explore dimensions of identity in Latino Mennonite communities and to create a new way of thinking about the history of American evangelicalism.

Felipe Hinojosa is an assistant professor of history at Texas A&M University. He is the recipient of numerous awards and fellowships, including the Hispanic Theological Initiative Dissertation Fellowship and a First Book Grant for Minority Scholars from the Louisville Institute.