All Joking Aside: American Humor and Its Discontents (Paperback) 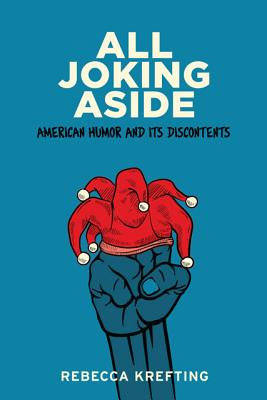 In this examination of stand-up comedy, Rebecca Krefting establishes a new genre of comedic production, "charged humor," and charts its pathways from production to consumption. Some jokes are tears in the fabric of our beliefs--they challenge myths about how fair and democratic our society is and the behaviors and practices we enact to maintain those fictions. Jokes loaded with vitriol and delivered with verve, charged humor compels audiences to action, artfully summoning political critique.

Since the institutionalization of stand-up comedy as a distinct cultural form, stand-up comics have leveraged charged humor to reveal social, political, and economic stratifications. All Joking Aside offers a history of charged comedy from the mid-twentieth century to the early aughts, highlighting dozens of talented comics from Dick Gregory and Robin Tyler to Micia Mosely and Hari Kondabolu.

The popularity of charged humor has waxed and waned over the past sixty years. Indeed, the history of charged humor is a tale of intrigue and subversion featuring dive bars, public remonstrations, fickle audiences, movie stars turned politicians, commercial airlines, emergent technologies, neoliberal mind-sets, and a cavalcade of comic misfits with an ax to grind. Along the way, Krefting explores the fault lines in the modern economy of humor, why men are perceived to be funnier than women, the perplexing popularity of modern-day minstrelsy, and the way identities are packaged and sold in the marketplace.

Appealing to anyone interested in the politics of humor and generating implications for the study of any form of popular entertainment, this history reflects on why we make the choices we do and the collective power of our consumptive practices. Readers will be delighted by the broad array of comic talent spotlighted in this book, and for those interested in comedy with substance, it will offer an alternative punchline.

Rebecca Krefting is an assistant professor of American Studies at Skidmore College. Her recent publications include: Laughter in the Final Instance: The Cultural Economy of Humor, an essay in the anthology The Laughing Stalk and a co-authored chapter, Placing Space: Architecture, Action, Dimension--Pedagogy and Practice, published in Feminist Practices: Interdisciplinary Approaches to Women in Architecture.