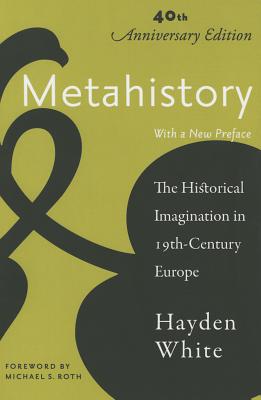 Since its initial publication in 1973, Hayden White's Metahistory has remained an essential book for understanding the nature of historical writing. In this classic work, White argues that a deep structural content lies beyond the surface level of historical texts. This latent poetic and linguistic content--which White dubs the metahistorical element--essentially serves as a paradigm for what an appropriate historical explanation should be.

To support his thesis, White analyzes the complex writing styles of historians like Michelet, Ranke, Tocqueville, and Burckhardt, and philosophers of history such as Marx, Hegel, Nietzsche, and Croce. The first work in the history of historiography to concentrate on historical writing as writing, Metahistory sets out to deprive history of its status as a bedrock of factual truth, to redeem narrative as the substance of historicality, and to identify the extent to which any distinction between history and ideology on the basis of the presumed scientificity of the former is spurious.

This fortieth-anniversary edition includes a new preface in which White explains his motivation for writing Metahistory and discusses how reactions to the book informed his later writing. In a new foreword, Michael S. Roth, a former student of White's and the current president of Wesleyan University, reflects on the significance of the book across a broad range of fields, including history, literary theory, and philosophy. This book will be of interest to anyone--in any discipline--who takes the past as a serious object of study.

Hayden White is a member of the American Academy of Arts and Sciences, professor emeritus of comparative literature at Stanford University, and professor emeritus of the history of consciousness at the University of California, Santa Cruz. He is the author of a number of books published by Johns Hopkins, including Tropics of Discourse: Essays in Cultural Criticism, The Content of the Form: Narrative Discourse and Historical Representation, and Figural Realism: Studies in the Mimesis Effect.