Streamliner: Raymond Loewy and Image-Making in the Age of American Industrial Design (Hardcover) 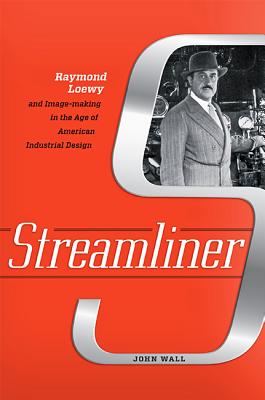 The true story of Raymond Loewy, whose designs are still celebrated for their unerring ability to advance American consumer taste.

Born in Paris in 1893 and trained as an engineer, Raymond Loewy revolutionized twentieth-century American industrial design. Combining salesmanship and media savvy, he created bright, smooth, and colorful logos for major corporations that included Greyhound, Exxon, and Nabisco. His designs for Studebaker automobiles, Sears Coldspot refrigerators, Lucky Strike cigarette packs, and Pennsylvania Railroad locomotives are iconic. Beyond his timeless designs, Loewy carefully built an international reputation through the assiduous courting of journalists and tastemakers to become the face of both a new profession and a consumer-driven vision of the American dream.

In Streamliner, John Wall traces the evolution of an industry through the lens of Loewy's eclectic life, distinctive work, and invented persona. How, he asks, did Loewy build a business while transforming himself into a national brand a half century before "branding" became relevant? Placing Loewy in context with the emerging consumer culture of the latter half of the twentieth century, Wall explores how his approach to business complemented--or differed from--that of his well-known contemporaries, including industrial designers Henry Dreyfuss, Walter Teague, and Norman Bel Geddes. Wall also reveals how Loewy tailored his lifestyle to cement the image of "designer" in the public imagination and why the self-promotion that drove Loewy to the top of his profession began to work against him at the end of his career. Streamliner is an important and engaging work on one of the longest-lived careers in industrial design.