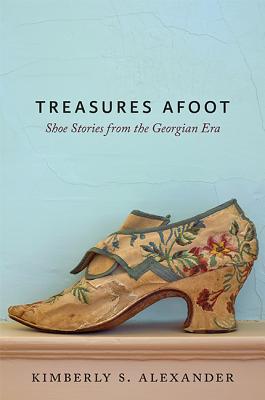 By Kimberly S. Alexander
$39.95
Possibly out of print. Email or call to check availability and price.

Shoes reveal the hopes, dreams, and disappointments of the early Americans who wore them.

In Treasures Afoot, Kimberly S. Alexander introduces readers to the history of the Georgian shoe. Presenting a series of stories that reveal how shoes were made, sold, and worn during the long eighteenth century, Alexander traces the fortunes and misfortunes of wearers as their footwear was altered to accommodate poor health, flagging finances, and changing styles. She explores the lives and letters of clever apprentices, skilled cordwainers, wealthy merchants, and elegant brides, taking readers on a colorful journey from bustling London streets into ship cargo holds, New England shops, and, ultimately, to the homes of eager consumers.

We trek to the rugged Maine frontier in the 1740s, where an aspiring lady promenades in her London-made silk brocade pumps; sail to London in 1765 to listen in as Benjamin Franklin and John Hose caution Parliament on the catastrophic effects of British taxes on the shoe trade; move to Philadelphia in 1775 as John Hancock presides over the Second Continental Congress while still finding time to order shoes and stockings for his fianc e's trousseau; and travel to Portsmouth, New Hampshire, in 1789 to peer in on Sally Brewster Gerrish as she accompanies President George Washington to a dance wearing a brocaded silk buckle shoe featuring a cream ground and metallic threads.

Interweaving biography and material culture with full-color photographs, this fascinating book raises a number of fresh questions about everyday life in early America: What did eighteenth-century British Americans value? How did they present themselves? And how did these fashionable shoes reveal their hopes and dreams? Examining shoes that have been preserved in local, regional, and national collections, Treasures Afoot demonstrates how footwear captures an important moment in American history while revealing a burgeoning American identity.

Historian Kimberly S. Alexander, a former curator at the MIT Museum, the Peabody Essex Museum, and Strawbery Banke, teaches material culture and museum studies at the University of New Hampshire.