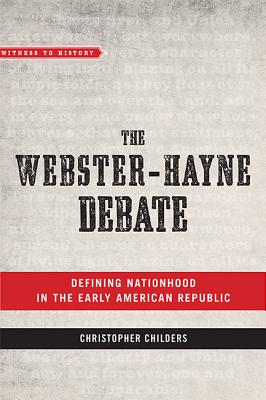 By Christopher Childers
$22.00
Possibly out of print. Email or call to check availability and price.

A crucial senatorial debate on the question of the states' relationship to the federal government.

Two generations after the founding, Americans still disagreed on the nature of the Union. Was it a confederation of sovereign states or a nation headed by a central government? To South Carolina Senator Robert Y. Hayne and others of his mindset, only the vigilant protection of states' rights could hold off an attack on the southern way of life, which was undergirded by slavery. Massachusetts Senator Daniel Webster, on the other hand, believed that the political and economic ascendancy of New England--and the nation--required a strong, activist national government.

In The Webster-Hayne Debate, Christopher Childers focuses on the sharp dispute that engaged Webster and Hayne in January 1830. During Senate discussion of western land policy, Childers explains, the senators' exchanges grew first earnest and then heated, finally landing on the question of union--its nature and its value in a federal republic. Childers argues that both Webster and Hayne, and the factions they represented, saw the West as key to the success of their political plans and sought to cultivate western support for their ideas.

A short, accessible account of the conflict and the related issues it addressed, The Webster-Hayne Debate captures an important moment in the early republic. Ideal for use in college classrooms or for readers interested in American history, this book examines a pivotal moment and a critical problem in the history of US politics. It also shows how Americans grappled with the issues of nationalism, sectionalism, and the meaning of union itself--issues that still resonate today.

Christopher Childers is an assistant professor of history at Pittsburg State University. He is the author of The Failure of Popular Sovereignty: Slavery, Manifest Destiny, and the Radicalization of Southern Politics and the coauthor of The American South: A History.