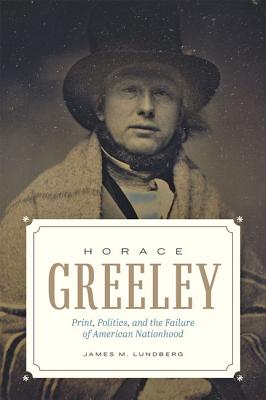 By James M. Lundberg
$37.00
Possibly out of print. Email or call to check availability and price.

A lively portrait of Horace Greeley, one of the nineteenth century's most fascinating public figures.

The founder and editor of the New-York Tribune, Horace Greeley was the most significant--and polarizing--American journalist of the nineteenth century. To the farmers and tradesmen of the rural North, the Tribune was akin to holy writ. To just about everyone else--Democrats, southerners, and a good many Whig and Republican political allies--Greeley was a shape-shifting menace: an abolitionist fanatic; a disappointing conservative; a terrible liar; a power-hungry megalomaniac.

In Horace Greeley, James M. Lundberg revisits this long-misunderstood figure, known mostly for his wild inconsistencies and irrepressible political ambitions. Charting Greeley's rise and eventual fall, Lundberg mines an extensive newspaper archive to place Greeley and his Tribune at the center of the struggle to realize an elusive American national consensus in a tumultuous age. Emerging from the jangling culture and politics of Jacksonian America, Lundberg writes, Greeley sought to define a mode of journalism that could uplift the citizenry and unite the nation. But in the decades before the Civil War, he found slavery and the crisis of American expansion standing in the way of his vision.

Speaking for the anti-slavery North and emerging Republican Party, Greeley rose to the height of his powers in the 1850s--but as a voice of sectional conflict, not national unity. By turns a war hawk and peace-seeker, champion of emancipation and sentimental reconciliationist, Greeley never quite had the measure of the world wrought by the Civil War. His 1872 run for president on a platform of reunion and amnesty toward the South made him a laughingstock--albeit one who ultimately laid the groundwork for national reconciliation and the betrayal of the Civil War's emancipatory promise.

Lively and engaging, Lundberg reanimates this towering figure for modern readers. Tracing Greeley's twists and turns, this book tells a larger story about print, politics, and the failures of American nationalism in the nineteenth century.

James M. Lundberg is the director of the Undergraduate Program in History and an assistant professor of the practice at the University of Notre Dame.