The Leftovers: A Novel (CD-Audio) 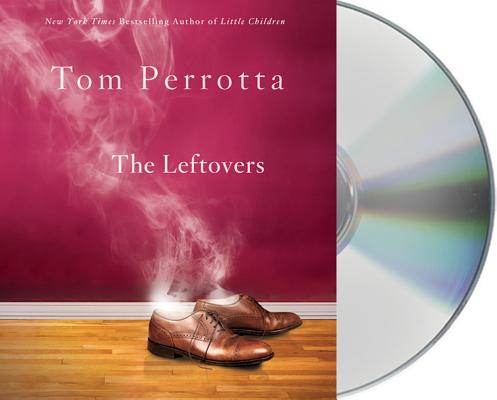 By Tom Perrotta, Dennis Boutsikaris (Read by)
$39.99
Possibly out of print. Email or call to check availability and price.

“Perrotta's latest describes an apocalyptic event known as the Sudden Departure. In the middle of an ordinary day, millions of people around the world have disappeared. 'It's not the rapture!' cried the Christians left behind, as Jews, Muslims, Hindus, Buddhists, and atheists also disappeared. Using the event as a prism through which to view the residents of a small suburban town who must cope with their losses, understand the inexplicable, and move on with their lives, Perrotta employs his trademark humor and invites the reader to suspend disbelief and get to know and love the Leftovers.”
— Ellen Burns, Books On The Common, Ridgefield, CT


What if—whoosh, right now, with no explanation—a number of us simply vanished? Would some of us collapse? Would others of us go on, one foot in front of the other, as we did before the world turned upside down?

That's what the bewildered citizens of Mapleton, who lost many of their neighbors, friends and lovers in the event known as the Sudden Departure, have to figure out. Because nothing has been the same since it happened—not marriages, not friendships, not even the relationships between parents and children.

Kevin Garvey, Mapleton's new mayor, wants to speed up the healing process, to bring a sense of renewed hope and purpose to his traumatized community. Kevin's own family has fallen apart in the wake of the disaster: his wife, Laurie, has left to join the Guilty Remnant, a homegrown cult whose members take a vow of silence; his son, Tom, is gone, too, dropping out of college to follow a sketchy prophet named Holy Wayne. Only Kevin's teenaged daughter, Jill, remains, and she's definitely not the sweet "A" student she used to be. Kevin wants to help her, but he's distracted by his growing relationship with Nora Durst, a woman who lost her entire family on October 14th and is still reeling from the tragedy, even as she struggles to move beyond it and make a new start.

With heart, intelligence and a rare ability to illuminate the struggles inherent in ordinary lives, Tom Perrotta The Leftovers has written a startling, thought-provoking novel about love, connection and loss.

Tom Perrotta is the author of several works of fiction: Bad Haircut, The Wishbones, Election, and the New York Times bestselling Joe College and Little Children. Election was made into the acclaimed 1999 movie directed by Alexander Payne and starring Matthew Broderick and Reese Witherspoon. Little Children was released as a movie directed by Todd Field and starring Kate Winslet and Jennifer Connelly in 2006, and for which Perrotta received Golden Globe and Academy Award nominations for best screenplay. He lives outside of Boston, Massachusetts.

Dennis Boutsikaris, winner of AudioFile Magazine’s 2010 Best Voice in Mystery & Suspense, has recorded more than 100 audiobooks for publishers in the United States and Great Britain.  His critically-acclaimed work has garnered four Golden Earphone awards and two Best Voices of the Year Awards from AudioFile Magazine and five Audies from the Audio Publishers of America.  His performances include reading novels by Richard North Patterson, Tom Clancy, John Grisham, and Joseph Finder.

Boutsikaris has appeared in numerous Broadway, television, and film roles. He played Mozart on Broadway in Amadeus, and has appeared on television shows including Shameless, The Good Wife, House M.D., Grey’s Anatomy, ER and Law & Order.  He has won two Obie Awards—one for Outstanding Performance in Nest of the Wood Grouse and one for Outstanding Performance in Sight Unseen. His films include The Bourne Legacy, W., The Education of Charlie Banks, *batteries not included, Dream Team, Boys on the Side, and Crocodile Dundee 2.

“Dennis Boutsikaris is the ideal audio jack-of-all trades for Perrotta's darkly comic novel of American life after the rapture. Boutsikaris captures the tender longing of Perrotta's prose as it harks back to a lost happiness now entirely destroyed by the unexplained disappearance of millions of people, both believers and nonbelievers. Utilizing the mellow timbre of his voice and effective moments of silence, Boutsikaris highlights the disconnection and dissatisfaction at the heart of Perrotta's novel. Proving to be a superb narrator for Perrotta's work, Boutsikaris's quiet excellence is akin to that of the author.” —Publishers Weekly, starred review

“Dennis Boutsikaris executes this production with a matter-of-fact tone that works to emphasize the surrealism that permeates Perrotta's novel…Boutsikaris does well providing a straight vocal rendering of the details of Perrotta's world while amply delivering emotional resonance and energy when portraying the characters' states of mind. He keeps his voices and tones straight despite the shifting of perspective from chapter to chapter.” —AudioFile Magazine

“It's quite an imaginative tale, and rather deep, with bits of lightness thrown in for good measure. Good for those who don't mind a trip to the dark side.” —The Mercury

“A bonus interview with the author enhances this dramatic and enthralling story. Highly recommended.” —The Midwest Book Review

“The great character actor, Dennis Boutsikaris, shows his skill once again in reading this novel, complementing the narrative…I enjoyed The Leftovers in the overall experience it delivers, but I especially appreciated the unique, imaginative, and human perspectives that Perrotta created for out listening/reading pleasure.” —New World Review

“Perrotta makes this subdued world come vividly alive, and the reading by actor Dennis Boutsikaris has just the right tone.” —The Winston-Salem Journal

“A balanced presentation of this story of those left behind after the biblical Rapture – or something closely resembling it – takes place.” —The Los Angeles Times

“[Perrotta's] most mature, absorbing novel, one that confirms his development from a funnyman to a daring chronicler of our most profound anxieties and human desires...Leavened with humor and tinged with creepiness, this insightful novel draws us into some very dark corners of the human psyche.” —Washington Post

“[Perrotta's] most ambitious book to date....The premise is as simple as it is startling (certainly for the characters involved). The novel is filled with those who have changed their lives radically or discovered something crucial about themselves, as radical upheaval generates a variety of coping mechanisms. Though the tone is more comic than tragic, it is mainly empathic, never drawing a distinction between "good" and "bad" characters, but recognizing all as merely human--ordinary people dealing with an extraordinary situation.” —Kirkus Reviews (starred)

“Ever since Little Children, Tom Perrotta has been a master chronicler of suburban ennui, but he takes things to a new level with his wry, insightful, unputdownable novel The Leftovers...Profoundly entertaining...The Leftovers brims with joy, hilarity, tenderness and hope.” —Marie Claire

“The Leftovers is sort of an "Our Town" for End Times. Tom Perrotta, our Balzac of the burbs, has come up with a wild premise for his engaging, entertaining new novel. Suddenly, a huge number of people vanish from this earth. The only explanation is that The Rapture has occurred…He narrows his affectionate and gently satiric focus to the middle-American village of Mapleton and shows us a bunch of folks trying to get on with their lives…The novel intertwines these stories at a graceful pace in prose so affable that the pages keep turning without hesitation. With Perrotta at the controls, you buy the set-up and sit back as he takes off.” —Chicago Sun Times

“Perrotta combines absurd circumstance and authentic characters to wondrous effect, turning his story into a vivid exploration of what we believe, what matters most, and how, if untethered, we move on…Perrotta treats his characters with sympathy and invites the reader to do the same.” —Seattle Times

“In his provocative new novel Tom Perrotta dives straight into our unease…it's a gentle, Perrotta-esque go at sci-fi, without any mangled bodies or bombed-out buildings; it's a realistic novel built on a supernatural foundation.” —Boston Globe

“Perrotta's gift is his ability to infuse satire with warmth, to find significance in the absurd. It's easy to mock extreme forms of religious expression. It's harder to find their meaning and application. Perrotta does both in this rich and oddly reassuring read.” —More Magazine

“The best book about the Rapture since the New Testament.” —"The Bullseye" in Entertainment Weekly

“Start with what the author calls a Rapture-like phenomenon, mix in some suburban angst, and poof: All other apocalyptic fiction gets blown away.” —O, The Oprah Magazine (selected as one of the Best Fiction titles of 2011)