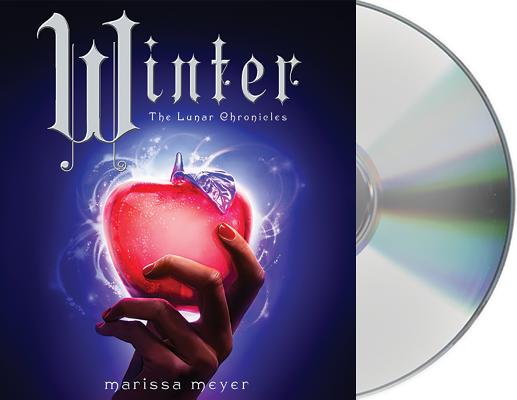 By Marissa Meyer, Rebecca Soler (Read by)
$78.99
Possibly out of print. Email or call to check availability and price.

This is book number 4 in the The Lunar Chronicles series.

Princess Winter is admired by the Lunar people for her grace and kindness, and despite the scars that mar her face, her beauty is said to be even more breathtaking than that of her stepmother, Queen Levana.

Winter despises her stepmother, and knows Levana won't approve of her feelings for her childhood friend--the handsome palace guard, Jacin. But Winter isn't as weak as Levana believes her to be and she's been undermining her stepmother's wishes for years. Together with the cyborg mechanic, Cinder, and her allies, Winter might even have the power to launch a revolution and win a war that's been raging for far too long.

Can Cinder, Scarlet, Cress, and Winter defeat Levana and find their happily ever afters? Fans will not want to miss this thrilling conclusion to Marissa Meyer's national bestselling Lunar Chronicles series.

The audio includes an interview between the author and the narrator.

Marissa Meyer is the #1 New York Times–bestselling author of the Renegades Trilogy, The Lunar Chronicles series, the Wires and Nerve graphic novels, and The Lunar Chronicles Coloring Book. Her first standalone novel, Heartless, was also a #1 New York Times bestseller. Marissa created and hosts a podcast called The Happy Writer. She lives in Tacoma, Washington, with her husband and their two daughters.

Rebecca Soler is a film and voiceover actress who won a 2009 AudioFile Earphones Award for her narration of After by Amy Efaw. Her audiobook credits include work by authors such as Judy Blume, James Patterson and Sarah Dessen. Soler has also narrated the popular young adult series The Lunar Chronicles by Marissa Meyer. Her voice over credits include various video games, like Star Wars: The Old Republic and Red Dead Redemption and television shows such as Pokemon, Yu-Gi-Oh, and Teenage Mutant Ninja Turtles. She lives in New York City.

"Reader Soler is one of those magical voice actors who can create a seemingly endless supply of memorable voices. Here, she offers an appropriately sweet, fluttery Snow White-esque voice for Winter; a deliciously purring, cooing "popular mean girl" voice for Queen Levana; a French accent for Jacinl and many, many more. Even background characters who appear for just a line or two get distinctive voices, such as an Australian-accented guest at the wedding banquet. Soler's pacing is excellent, and she skillfully navigates listeners through Meyer's 23-hour story." -Publishers Weekly

"Narrator Soler returns to deliver an epic performance. She continues to enrapture listeners as she takes on the vocal stylings of 10 main characters and a plethora of secondary voices. She breathes personality into each while maintaining distinctions among the voices with a variety of pitches and accents, including French, Australian, and Irish. Her whimsical portrayal of Winter as seemingly vague and almost fluttery is a perfect contrast to the flawlessly venomous Queen Levana. Solar ramps up the pace to bring listeners to the edge of their seats in a thrilling escape scene and just as expertly slows it down for the romantic interludes. Soler’s narration helps bring this epic series to a wonderfully engaging conclusion." -Booklist