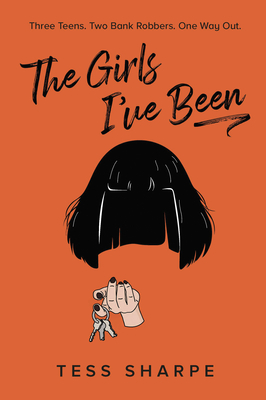 A deliciously commercial YA page-turner about the daughter of a con artist who is taken hostage in a bank heist. Nora O'Malley is a lot of things. A sister. An ex. A secret girlfriend. Kind of crooked, but reformed... somewhat. Nora O'Malley's been a lot of girls. As the daughter of a con-artist who targets criminal men, she grew up her mother's protege. But when mom fell for the mark instead of conning him, Nora pulled the ultimate con: escape. For five years she's been playing at normal. But she needs to dust off the skills she ditched because she has three problems: #1: her ex walked in on her with her girlfriend. Even though they've all been inseparable for months, Wes didn't know about her and Iris. #2: The morning after, they all have to meet to deposit the fundraiser money they raised together. It's a nightmare that goes from awkward to deadly. Because #3: right after they get in the bank, two guys start robbing it. But they have no idea who they're really holding hostage. The robbers are trouble. Nora's something else entirely.

Born in a mountain cabin to a punk-rocker mother, Tess Sharpe grew up in rural northern California. She lives deep in the backwoods with a pack of dogs and a growing colony of formerly feral cats. She is the author of Barbed Wire Heart, the critically acclaimed YA novel Far From You, and the Jurassic World prequel, The Evolution of Claire.Tess is also the co-editor of the young adult book, Toil & Trouble, a feminist anthology about witches.