The Double Life Is Twice as Good: Essays and Fiction (Paperback) 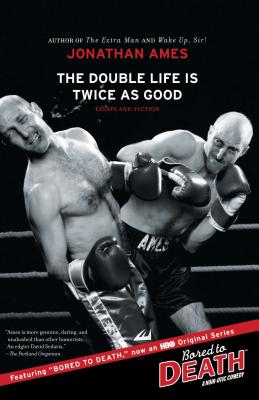 In The Double Life Is Twice as Good, fans will be treated to a deft and charming compilation of Ames’s journalism, personal essays, and short fiction. Featuring illuminating profiles of Marilyn Manson and Lenny Kravitz, his adventures at a goth festival in the Midwest, a story written for Esquire on a napkin, as well as a comic strip collaboration with graphic artist Nick Bertozzi, Ames’s unique style and personality-driven humor shines throughout this wickedly funny collection. Also included is the short story, “Bored to Death,” a Raymond Chandler–esque tale about a struggling writer-turned-detective who becomes quickly embroiled in the search for a missing college co-ed, which inspired the HBO series of the same name. Described by The Portland Oregonian as “an edgier David Sedaris,” Ames will have you hooked with this brilliant collection.

"Bizarrely disparate: The topics range from prostitution to goth to tennis, but in Ames's capable hands the disparity works." -- Penthouse

"This hilarious, often harrowing compendium of articles and essays find [Ames] immersed in demented endeavors...certain to make his many fans snicker and squirm." -- Booklist

"Filled with its share of Ames classics." -- Kirkus Reviews