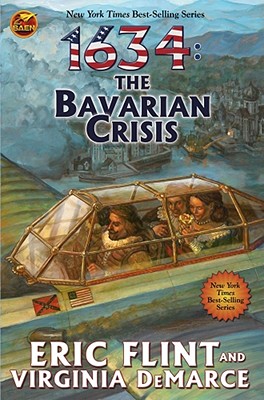 By Eric Flint, Virginia DeMarce
$7.99
Possibly out of print. Email or call to check availability and price.

1.      The latest in the New York Times best-selling series.

2.      The Ring of Fire series is the most popular and best-selling alternate history series for the past six years and is still growing.

6.      Teaser chapter for Grantville Gazette V and The Stoneholding.

The Thirty Years War continues to ravage 17th century Europe, but a new force is gathering power and influence: the Confederated Principalities of Europe, an alliance between Gustavus Adolphus, King of Sweden, and the West Virginians from the 20th century led by Mike Stearns who were hurled centuries into the past by a mysterious cosmic accident.

The CPE has the know-how of 20th century technology, but needs iron and steel to make the machines. The iron mines of the upper Palatinate were rendered inoperable by wartime damage, and American know-how is needed on the spot to pump them out and get the metal flowing again—a mission that will prove more complicated than anyone expects. In the maelstrom that is Europe, even a 20th century copy of the Encyclopedia Britannica can precipitate a crisis, when readers learn of the 1640 Portuguese revolt, a crisis that will involve Naples as well. Another factor: Albanian exiles in Naples, inspired by the Americans, are plotting to recover lost Albanian turf, which will precipitate yet another crisis in the Balkans.

This troubled century was full of revolutions and plans for more revolutions before the Americans arrived, and gave every would-be revolutionary an example of a revolution that succeeded. Europe is a pot coming to a boil, and Mike Stearns will have his hands full seeing that it doesn't boil over on to Grantville and the CPE.