Overboard!: A True Blue-water Odyssey of Disaster and Survival (Paperback) 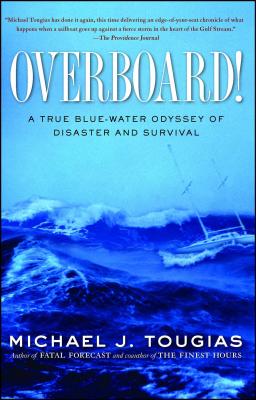 From masterful storyteller Michael J. Tougias comes a new, heart-stopping true-life tale of maritime disaster, his most thrilling and amazing story yet.

In May 2005, Tom Tighe, captain of a forty-five-foot-long sailboat named the Almeisan, and his first mate, Loch Reidy, welcomed three new crewmembers for a five-day voyage from Connecticut across the blue waters of the Gulf Stream to sun-drenched Bermuda. The new crew included forty-six-year-old Kathy Gilchrist, seventy-year-old Ron Burd, and thirty-four-year-old Chris Ferrer. Although Tighe had made the trip forty-eight times, with Reidy accompanying him on twenty of those voyages, the rest of the crew had joined to learn more about offshore sailing.

Four days into the voyage, an enormous storm struck, sweeping two of the crew into the towering sea. The remaining crewmembers managed to stay aboard the vessel as it was slowly torn apart by the rampaging ocean. Overboard! follows the simultaneous desperate struggles of both those still on the boat and those fighting for their lives in the sea.

The Coast Guard, alerted to the Almeisan’s distress, rushed to the storm-tossed scene. Their ensuing search and rescue mission proved so spectacularly difficult and dangerous that it was later selected—from among thousands of incidents—as the Guard’s search and rescue case of the year. Highly trained helicopter pilots and rescue swimmers alike found themselves in almost as much trouble as those trapped by the ferocious ocean.

By turns tragic, thrilling, and deeply inspiring, Overboard! is a riveting, fast-paced story of death and survival at sea—amazing, unforgettable, and all true.

"A heart-pounding account of the storm that tore apart a 45-foot sailboat." -The Boston Globe

"Michael Tougias has done it again, this time delivering an edge-of-your-seat chronicle of what happens when a sailboat goes up against a fierce storm in the heart of the Gulf Stream." -The Providence Journal