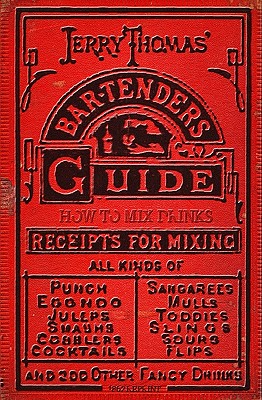 This is the most complete first edition * A reprint of the very first 1862 edition of Jerry Thomas' Bartenders Guide " How To Mix Drinks or A Bon Vivant's Companion ". This drink recipe book is probably the most famous bartenders' and cocktail book of all times, and it was the first real cocktail book ever published in the United States. This is a nostalgic and delicious homage to a drinking era that is gone but not forgotten. * In 1862 Thomas finished the Bartender's Guide (alternately titled How to Mix Drinks or The Bon-Vivant's Companion), the first cocktail book ever published in the United States. The book collects and codifies what was then an oral tradition of recipes from the early days of cocktails, including some of his own creations; the guide lays down the principles for formulating mixed drinks of all categories. This first edition of the guide include the first written recipes of such cocktails as the DAISY, the MINT JULEP. the FIZZ, the FLIP, Sour and many many more. Among other famous drinks are the BLUE BLAZER, the EYE-OPENER, the LOCOMOTIVE, the PICK-ME-UP, the CORPSE-REVIVER, and CHAIN-LIGHTNING. ****** This 1862 editions is the very first published edition, which has 238 pages (The 1887 edition, pulished 25 years later, has 132 pages only) ******

Jeremiah (Jerry) P. Thomas (1830-1885) was an American bartender; because of his pioneering work in popularizing cocktails across the United States, he is considered "the father of American mixology." In addition to writing the seminal work on cocktails, his creativity and showmanship established the image of the bartender as a creative professional. As such, he was often nicknamed "Professor" Jerry Thomas. Thomas was born in 1830 in Sackets Harbor, New York. He learned bartending in New Haven, Connecticut before sailing for California during its mid-1800s Gold Rush. While in California he worked as a bartender, gold prospector and minstrel show manager. He moved back to New York City in 1851, where he opened a saloon below Barnum's American Museum; it would be the first of four saloons he would run in New York City over his lifetime. After a time running his first bar he went on the road for several years, working as the head bartender at hotels and saloons in St. Louis, Missouri, Chicago, Illinois, San Francisco, California, Charleston, South Carolina and New Orleans, Louisiana. At one point he toured Europe, carrying along a set of solid-silver bar tools. He was well known for his showmanship as a bartender: he developed elaborate and flashy techniques of mixing cocktails, sometimes while juggling bottles, cups and mixers. He often wore flashy jewelry and had bar tools and cups embellished with precious stones and metals. At the Occidental Hotel in San Francisco, Thomas was earning $100 a week-more than the Vice President of the United States. Upon returning to New York City, he became head bartender at the Metropolitan hotel before opening his most famous bar on Broadway, between 21st and 22nd Streets, in 1866. Thomas was one of the first to display the work of Thomas Nast, and in his famous saloon he hung caricatures of the political and theatrical figures; one notable drawing, now lost, was of Thomas "in nine tippling postures colossally". He died in New York City of apoplexy in 1885 at the age of 55. His death was marked by substantial obituaries across the United States. In their obituary, The New York Times noted Thomas was "at one time better known to club men and men about town than any other bartender in this city, and he was very popular among all classes."