What the Spell (Life's a Witch) (Paperback) 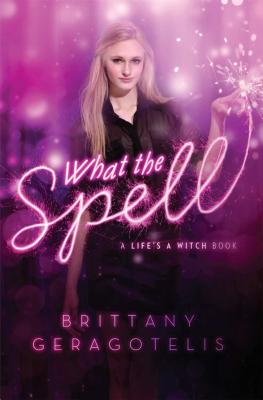 By Brittany Geragotelis
$9.99
Possibly out of print. Email or call to check availability and price.

A teenage witch juggles popularity and romance while keeping her powers a secret in this spellbinding debut.

Almost-sixteen-year-old Brooklyn feels invisible, but she desperately wants to be pretty, to be popular, to be adored by a cute guy. Luckily for her, she’s a witch about to come of age—so she’s only a few spells away from making it all happen.

On her milestone birthday, Brooklyn’s conservative parents finally unbind her powers. This newfound freedom leads to a spell-assisted makeover, entree into the cool clique, and the attention of her longtime crush, Asher. Even better, Brooklyn discovers her true power: the ability to magically match couples with a love spell.

But Brooklyn’s quest for popularity is not without its price. As the clique escalates their initiation tests and she relies on her powers to complete the tasks, Brooklyn finds herself in the same precarious position as her Salem ancestors: if she’s found out, she could be vilified—and lose Asher in the process. Can she make the most of her magic, or will she be luckless and loveless? Be careful what you witch for!

Brittany Geragotelis, a former Olympic-bound gymnast and magazine editor, is a self-professed pop culture junkie turned author. Her paranormal action book Life’s a Witch received 18 million reads on the writing site Wattpad.com. What the Spell is the first published book in the series, followed by Life’s a Witch and The Witch Is Back. Brittany lives in Los Angeles with her husband, Matt, and two cats, Murray and Cohen. Visit her at BrittanyGeragotelis.com.

“The wish-fulfilling comeuppance at the end of this installment is worth the price of admission.”
— Publishers Weekly