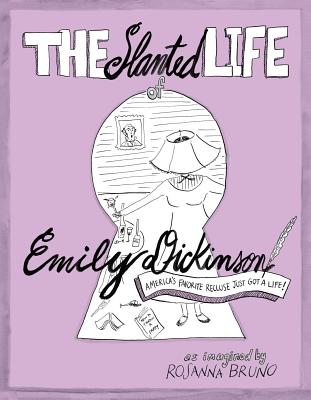 "Rosanna Bruno’s speculative look at Emily Dickinson’s social media feed is so hysterical you may find yourself with a case of the vapors."--Alison Bechdel

Emily Dickinson said: “Tell all the truth, but tell it slant.” Artist Rosanna Bruno does just as the poet asked in a series of several dozen witty, hand-drawn cartoons inspired by what we know--and don’t know--about Dickinson’s life and work. The Slanted Life of Emily Dickinson explores--often hilariously, and always respectfully--the myth surrounding the reclusive poet using her own words to skew, or slant, a story that is already somewhat fuzzy in detail.

Beginning with a line or two from Dickinson’s poems or letters, Rosanna Bruno presents an image of a real or imagined event. For example, she imagines Dickinson’s Facebook page (“Relationship Status: It’s Complicated”), her OkCupid dating profile (“I am small, like the wren; and my hair is bold, like the chestnut burr…”), her senior yearbook page (“Girl Most Likely to Talk to Birds”), and several other hilarious scenes and fictional artifacts. The result is a wickedly funny portrait of one of the most beloved (and mythologized) poets in the American canon.

Rosanna Bruno is a visual artist and based in NY, where she makes paintings, comics, and — sometimes—a mess. She received a New York Foundation for the Arts grant in 2012. Her paintings have been exhibited internationally, and her cartoons have been published in BOMB magazine and featured in The Daily Beast and The Toast, among other publications.

"In the age of smartphones and infinitesimal attention spans, how to keep alive the work of a contemplative nineteenth century poet who rarely left her room? Rosanna Bruno’s speculative look at Emily Dickinson’s social media feed is so hysterical you may find yourself with a case of the vapors. Her cartoons are ridiculously funny, but they also incorporate a serious look at the poet’s life, friends, and work. Emily Dickinson probably did not have a bong in her room, or belt out Janis Joplin at karaoke night—but imagining these slant versions brings her alive in a delightful new way." (Alison Bechdel)