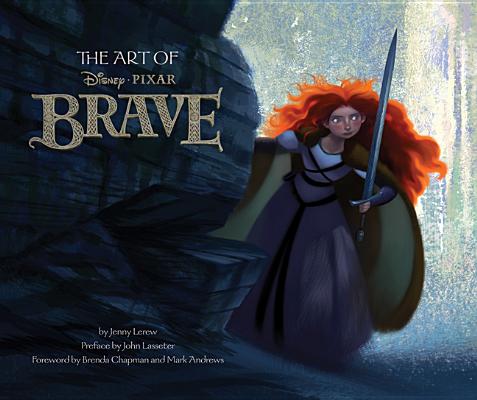 Brave is Pixar's thirteenth feature film, but it marks two big firsts for the award-winning animation studio. It's Pixar's first feature film driven by a female lead and its first set in an ancient historical period. Against a backdrop of castles, forests, and highlands, Brave follows the fiery Merida as she clashes with the duty of her royal life and embarks on a journey through the rugged landscape of the dark ages of Scotland. At once epic and intimate, the latest Pixar masterpiece weaves a story of magic, danger, and adventure and the fierce bonds of family.
Featuring behind-the-scenes interviews with the film's many artists and filmmakers, The Art of Brave showcases the gorgeous concept art that went into the making of this movie, including color scripts, storyboards, character studies, environment art, sculpts, and more. A Foreword by Brenda Chapman and Mark Andrews, the film's directors, and a preface by Chief Creative Officer John Lasseter shed light on the creation of this landmark film.

Jenny Lerew is an animation story artist and the author of a noted blog on animation art and history, The Blackwing Diaries. She is also the author of Scrambled Ink, a compendium of original illustrated stories, and has worked as a director and story artist at Warner Bros, Amblimation, Turner, Disney, and DreamWorks. Her most recent film was DreamWorks Animation's How to Train Your Dragon. Jenny lives in Pasadena, California.

John Lasseter is a two-time Academy Award–winning director and the chief creative officer at Pixar and Walt Disney Animation Studios.

Brenda Chapman is the director of Brave. She previously directed DreamWorks Animation Studios' 1998 release, The Prince of Egypt, and worked as a story artist on a number of beloved films from Walt Disney Animation Studios, including The Little Mermaid, The Rescuers Down Under, Beauty and the Beast, The Hunchback of Notre Dame, and Fantasia/2000. Chapman was also the story supervisor on Disney's The Lion King.

Mark Andrews is the director of Brave. He has worked in Pixar's story department on a number of feature films including The Incredibles, Cars, Ratatouille, and Toy Story 3, and also co-wrote and co-directed the Academy Award® nominated Pixar short film One Man Band. Most recently, Andrews was co-writer and second unit director on the Disney film John Carter.

"If you marveled at the artistry of Disney Pixar's 'Brave,' you're going to love 'The Art of Brave.'" - Sioux City Journal

"The Art of Brave is still one of the best art books from Chronicle Books to date."
Upcoming Pixar Blog