The Art of Ralph Breaks the Internet: Wreck-It Ralph 2: (A Behind-the-Scenes Look at the Making of the Disney Film, Animation Book, Gift for Animators) (Disney x Chronicle Books) (Hardcover) 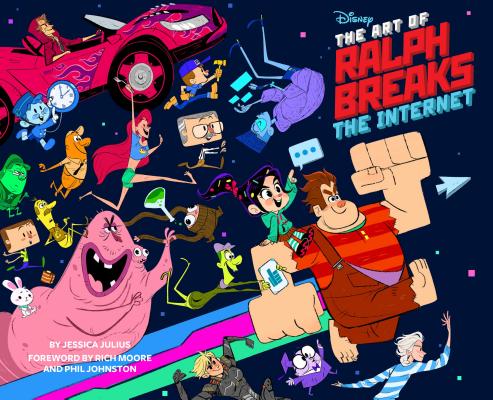 A great collectors book for fans of Disney Oscar-nominated Wreck it Ralph movies and a resource for animation and film students.

Features exclusive content on the making of Ralph Breaks the Internet: Wreck-It Ralph 2

In the follow-up to the Oscar–nominated film Wreck-It Ralph, our hero leaves his arcade for the expansive universe of the Internet. Disney's artists have brought the world of the Internet (a world you may think you know) to life in an all-new, imaginative way. Through never-before-seen concept art, character sketches, storyboards, and colorscripts, along with interviews with the production team, The Art of Ralph Breaks the Internet reveals the artistic process behind Disney's highly anticipated sequel.

Fans of The Art ofWreck-It Ralph (The Art of Disney) and The Art of Pixar: 25th Anniversary: The Complete Color Scripts and Select Art from 25 Years of Animation will enjoy this book.

Jessica Julius is director, creative affairs, at Walt Disney Animation Studios and author of The Art of Zootopia. She lives in Los Angeles.

Phil Johnston is the director and screenwriter of Ralph Breaks the Internet. He co-wrote Zootopia and Wreck-It Ralph.

Rich Moore is the director of Ralph Breaks the Internet, the Oscar-winning Zootopia, and Wreck-it Ralph.

"What an AWESOME BOOK. 5 out of 5"
-Character Design blog

"My favorite part, though, is diving into the design of the internet itself. What should email look like, or eBay, or YouTube? What do the users look like, and how do they get around? The filmmakers had to make countless decisions about what the internet would be as a physical place, and it's a lot of fun to see the various ways that things could have turned out. Oh, and the logos: there are so many of them, because the movie needed to plaster them everywhere, so the graphics teams were given free reign to come up with app names and logo designs, many of which you see floating by during the end credits of the movie. In this book, you'll get a chance to peruse those a little more."
-Geek Dad

"features a wonderful array of concept art from the creation of the film, and it is always endlessly fascinating to glimpse at the ideas that almost were, or how far the development of various characters or set pieces have evolved before the finished product."
-Mickey Mindset