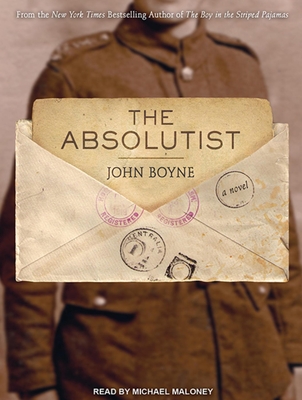 By John Boyne, Michael Maloney (Narrated by)
$29.99
Possibly out of print. Email or call to check availability and price.

It is September 1919: twenty-one-year-old Tristan Sadler takes a train from London to Norwich to deliver a package of letters to the sister of Will Bancroft, the man he fought alongside during the Great War. But the letters are not the real reason for Tristan's visit. He can no longer keep a secret and has finally found the courage to unburden himself of it. As Tristan recounts the horrific details of what to him became a senseless war, he also speaks of his friendship with Will-from their first meeting on the training grounds at Aldershot to their farewell in the trenches of northern France. The intensity of their bond brought Tristan happiness and self-discovery as well as confusion and unbearable pain.The Absolutist is a masterful tale of passion, jealousy, heroism, and betrayal set in one of the most gruesome trenches of France during World War I. This novel will keep listeners on the edge of their seats until its most extraordinary and unexpected conclusion, and it will stay with them long after they've finished.

John Boyne is the "New York Times" bestselling, award-winning author of several novels, including "Crippen," "The Thief of Time," "The Congress of Rough Riders," and "The Boy in the Striped Pajamas."

Michael Maloney is an accomplished actor and audiobook narrator. He has earned multiple "AudioFile" Earphones Awards, including for "King of the Middle March" by Keven Crossley-Holland.

"A thought-provoking and surprising page-turner that for some readers may recall Ian McEwan's Atonement, another novel with themes of war and recrimination." ---Library Journal Starred Review