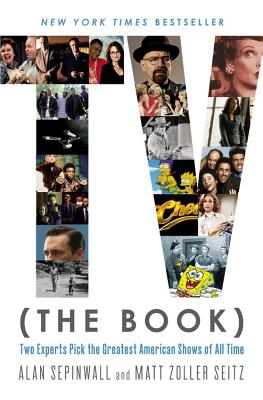 By Alan Sepinwall, Matt Zoller Seitz
$19.99
Possibly out of print. Email or call to check availability and price.

Is The Wire better than Breaking Bad? Is Cheers better than Seinfeld? What's the best high school show ever made? Why did Moonlighting really fall apart? Was the Arrested Development Netflix season brilliant or terrible?

For twenty years-since they shared a TV column at Tony Soprano's hometown newspaper-critics Alan Sepinwall and Matt Zoller Seitz have been debating these questions and many more, but it all ultimately boils down to this:

What's the greatest TV show ever?

That debate reaches an epic conclusion in TV (THE BOOK). Sepinwall and Seitz have identified and ranked the 100 greatest scripted shows in American TV history. Using a complex, obsessively all-encompassing scoring system, they've created a Pantheon of top TV shows, each accompanied by essays delving into what made these shows great. From vintage classics like The Twilight Zone and I Love Lucy to modern masterpieces like Mad Men and Friday Night Lights, from huge hits like All in the Family and ER to short-lived favorites like Firefly and Freaks and Geeks, TV (THE BOOK) will bring the triumphs of the small screen together in one amazing compendium.

Sepinwall and Seitz's argument has ended. Now it's time for yours to begin!

Critics Alan Sepinwall and Matt Zoller Seitz have been writing together since 1997, when they were paired up on the TV beat at the Star-Ledger of Newark, New Jersey, the newspaper at the end of Tony Soprano's driveway.
Matt Zoller Seitz is a finalist for the Pulitzer Prize in criticism, the TV critic for New York Magazine and Vulture.com, the editor in chief of RogerEbert.com, and the author of books on television and cinema, including Mad Men Carousel, The Wes Anderson Collection, and The Oliver Stone Experience. Alan Sepinwall is the TV critic for HitFix.com and the author of The Revolution Was Televised. Sepinwall's episode-by-episode approach to reviewing his favorite TV shows "changed the nature of television criticism," according to Slate, which called him "the acknowledged king of the form."

"I hate Top Ten lists and am existentially opposed to numerically rating television shows, so this book is my worst nightmare! You should buy it anyway, because Alan and Matt are shrewd, witty, and insightful critics, even if they are wrong about Cheers being better than 30 Rock."—Emily Nussbaum, The New Yorker

"What fun to dive into a book that not only inspires but invites debate over your favorite TV shows. Which ones truly deserve to be in the Pantheon? Which ones did or didn't make the cut? Any book that celebrates everything from The Sopranos to Rocky and Bullwinkle gets my attention...and deserves yours."
—Leonard Maltin, film critic/ historian

"It's the Golden Age of TV, yes, but TV: THE BOOK shows we are also in the Golden Age of TV criticism. In the same way so many of us made Leonard Maltin's Movie Guide or Pauline Kael's or David Thomson's review collections our film bibles, readers will be poring over this magnificent volume for years to come. An essential, provocative, and irresistible tome from two of our greatest critics." —Megan Abbott, bestselling author of The Fever and You WillKnow Me