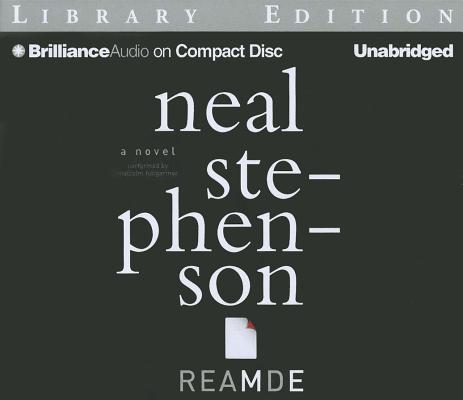 By Neal Stephenson, Malcolm Hillgartner (Read by)
$99.97
Possibly out of print. Email or call to check availability and price.

“Neal Stephenson has once again proven his breathtaking skill and mastery with a diverse range of characters and subjects. He brings together online gaming, the Russian mafia, hackers, terrorists, fantasy authors, and one resourceful former smuggler in a razor-sharp thriller. Reamde is a book for anyone who enjoys an intelligent and plausible adventure. If we truly live in a global society, then it's Neal Stephenson who not only knows how to draw the map of this new world, but can take us anywhere on that map with speed, grace, and agility.”
— Karen Tallant, The Booksellers at Laurelwood, Memphis, TN

"Stephenson has a once-in-a-generation gift: he makes complex ideas clear, and he makes them funny, heartbreaking, and thrilling."
--Time

The #1 New York Times bestselling author of Anathem, Neal Stephenson is continually rocking the literary world with his brazen and brilliant fictional creations--whether he's reimagining the past (The Baroque Cycle), inventing the future (Snow Crash), or both (Cryptonomicon). With Reamde, this visionary author whose mind-stretching fiction has been enthusiastically compared to the work of Thomas Pynchon, Don DeLillo, Kurt Vonnegut, and David Foster Wallace--not to mention William Gibson and Michael Crichton--once again blazes new ground with a high-stakes thriller that will enthrall his loyal audience, science and science fiction, and espionage fiction fans equally. The breathtaking tale of a wealthy tech entrepreneur caught in the very real crossfire of his own online fantasy war game, Reamde is a new high--and a new world--for the remarkable Neal Stephenson.