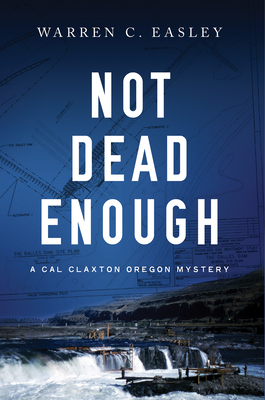 By Warren C. Easley
$26.95
Possibly out of print. Email or call to check availability and price.

This is book number 4 in the Cal Claxton Oregon Mysteries series.

The first closing of the floodgates of the mammoth Dalles Dam on the Columbia River inundated the sacred falls and the Native American village at Celilo which depended on the river's magnificent fish. Nelson Queah, Wasco Indian, war hero, and passionate opponent of the dam, watched helplessly as 10,000 years of tribal history and fishing tradition disappeared. That 1957 night, Nelson Queah vanished without a trace. Fifty years later, attorney Cal Claxton, new to Portland after a career as a prosecutor in Los Angeles, attends a commemoration of the flooding of the falls at the behest of his friend, Philip Lone Deer, who introduces Cal to his cousin, Winona Cloud. Winona is Nelson Queah's granddaughter. Spurning the story of a witness at the time who claimed to have seen Queah drunk by the river, she reveals she's found a cache of letters at her grandmother's home, letters Queah wrote to his wife before he vanished. They suggest foul play, not an accidental drowning. Cal, still grieving over his own wife's suicide, agrees to check out the cold case. He locates the man who put out the drunk story and sets up an interview. When he arrives, he finds the man shot by a sniper. Cal gets a glimpse of the shooter and becomes a target himself. Struggling to stay one step ahead of a relentless killer, Cal must navigate between Native American and white cultures, and feuding police jurisdictions. Oregon politics are also in play; various men involved with the dam's construction are still alive, some of them powerbrokers. Plus activists are questioning the value of dams in light of new energy sources and the dwindling spawning salmon. And then there's Cal's growing interest in the beautiful, headstrong Winona. Not Dead Enough is a story sure to grab fans of Dana Stabenow, CJ Box, and Tony and Anne Hillerman by the throat.