The Shadow of El Centro: A History of Migrant Incarceration and Solidarity (Justice) (Paperback) 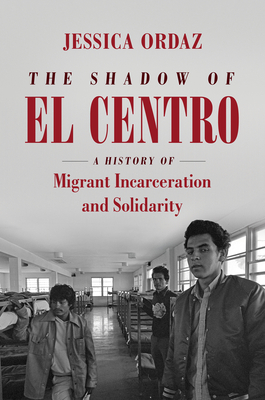 Bounded by desert and mountains, El Centro, California, is isolated and difficult to reach. However, its location close to the border between San Diego and Yuma, Arizona, has made it an important place for Mexican migrants attracted to the valley's agricultural economy. In 1945, it also became home to the El Centro Immigration Detention Camp. The Shadow of El Centro tells the story of how that camp evolved into the Immigration and Customs Enforcement Service Processing Center of the 2000s and became a national model for detaining migrants--a place where the policing of migration, the racialization of labor, and detainee resistance coalesced.

Using government correspondence, photographs, oral histories, and private documents, Jessica Ordaz reveals the rise and transformation of migrant detention through this groundbreaking history of one detention camp. The story shows how the U.S. detention system was built to extract labor, to discipline, and to control migration, and it helps us understand the long and shadowy history of how immigration officials went from detaining a few thousand unauthorized migrants during the 1940s to confining hundreds of thousands of people by the end of the twentieth century. Ordaz also uncovers how these detained migrants have worked together to create transnational solidarities and innovative forms of resistance.