They Were the Rough Riders: Inside Theodore Roosevelt's Famed Cavalry Regiment (Paperback) 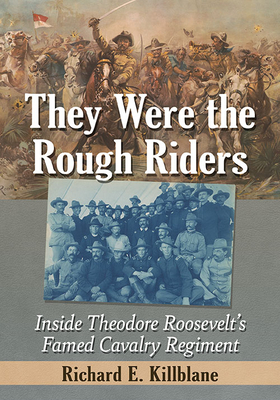 By Richard E. Killblane
Email or call for price

After just four weeks of training, Colonel Theodore Roosevelt's Rough Riders--a regiment of cowboys recruited into the First U.S. Volunteer Cavalry--fought in Cuba during the Spanish-American War with the skill of seasoned regulars. The unit reflected the future president's character as a wealthy Ivy Leaguer who went west to experience frontier life. Most of the Rough Riders were seasoned cowhands from the Southwest, but Ivy League athletes, sons of millionaires and lawmen filled out the ranks. Roosevelt molded this diverse group into a cohesive, efficient fighting force and led them to victory on San Juan Hill. Told from the perspective of the men in the regiment, this book traces the history of the Rough Riders from conception to disbanding, and Roosevelt's transformation into an American hero.

Richard E. Killblane is an Army veteran and retired Department of Army historian, and the author of several books. He lives in Williamsburg, Virginia.