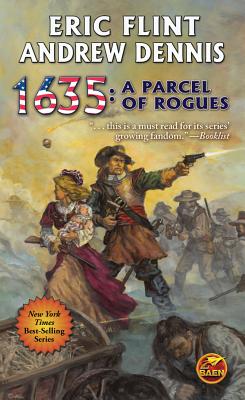 By Eric Flint, Andrew Dennis
$7.99
Possibly out of print. Email or call to check availability and price.

This is book number 20 in the Ring of Fire series.

Book #20 in the multiple New York Times best-selling Ring of Fire series. When the diplomatic embassy from the United States of Europe was freed from the Tower of London during the Baltic War, most of its members returned to the continent. But some remained behind in Britain, including notorious enemy to the crown Oliver Cromwell. Now,  the hunt for Cromwell is on, with King Charles himself demanding Cromwell’s head.

When the diplomatic embassy from the United States of Europe was freed from the Tower of London during the Baltic War, most of its members returned to the continent. But some remained behind in Britain: Oliver Cromwell and a few companions, including the sharpshooter Julie Sims, her Scot husband Alex Mackay, and Cromwell’s Irish-American self-appointed watchdog Darryl McCarthy.

Soon, the hunt is on for the most notorious rebel in English history, with King Charles himself demanding Cromwell’s head. The new chief minister Richard Boyle, Earl of Cork, brings over from Ireland a notorious crew of cutthroats led by a man called Finnegan to track down and capture the escapees from the Tower.

The hunt passes through England and into Scotland, where the conflict between Cromwell and his companions and their would-be captors becomes embroiled in Scotland’s politics, which are every bit as savage and ruthless as Finnegan and his men. To make things still more conflicted and confused, the time Darryl McCarthy spends fighting alongside Cromwell forces him against his will to admire and respect—and even like—the man, despite Cromwell’s demonic reputation among all self-respecting Irish nationalist families like Darryl’s own.

It’s a Gordian knot anywhere you look—until Julie Sims brings out her rifle. Now it’s the turn of Scot partisans and English lords and Irish toughs to learn the lesson already learned on the continent:

A safe distance isn’t what you think it is. Not after the American angel of death spreads her wings.

About 1632:
"A rich complex alternate history with great characters and vivid action. A great read and an excellent book."—David Drake

“ . . . reads like a technothriller set in the age of the Medicis . . .”—Publishers Weekly