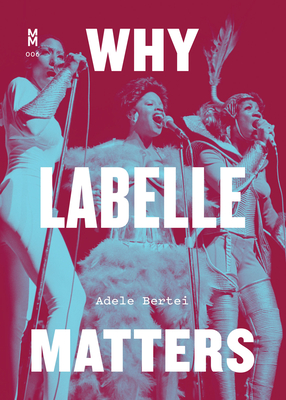 Performing as the Bluebelles in the 1960s, Patti LaBelle, Nona Hendryx, and Sarah Dash wore bouffant wigs and chiffon dresses, and they harmonized vocals like many other girl groups of the era. After a decade on the Chitlin Circuit, however, they were ready to write their own material, change their name, and deliver—as Labelle—an electrifyingly celestial sound and styling that reached a crescendo with a legendary performance at the Metropolitan Opera House to celebrate the release of Nightbirds and its most well-known track, “Lady Marmalade.” In Why Labelle Matters, Adele Bertei tells the story of the group that sang the opening aria of Afrofuturism and proclaimed a new theology of musical liberation for women, people of color, and LGBTQ people across the globe.

With sumptuous and galactic costumes, genre-bending lyrics, and stratospheric vocals, Labelle’s out-of-this-world performances changed the course of pop music and made them the first Black group to grace the cover of Rolling Stone. Why Labelle Matters, informed by interviews with members of the group as well as Bertei’s own experience as a groundbreaking musician, is the first cultural assessment of this transformative act.

Adele Bertei’s music career began in Cleveland with Peter Laughner of Pere Ubu. She entered New York’s downtown scene of the late 1970s as an organist for the Contortions and went on to form the Bloods, the first out, queer, all women-rock band. Bertei has appeared in several indie films, most notably Lizzie Borden’s Born in Flames and The Offenders. As a singer/songwriter, she has toured with, written songs for, and recorded as a backup vocalist for a diverse group of artists including Tears for Fears, Thomas Dolby, Sandra Bernhard, Culture Club, Scritti Politti, Whitney Houston, Jamaaladeen Tacuma, Sheena Easton, Oleta Adams, Lydia Lunch, the Pointer Sisters, Matthew Sweet, and Sophie B. Hawkins. Bertei charted top twenty internationally with featured leads on Thomas Dolby’s “Hyperactive!” and Jellybean’s “Just a Mirage.” Bertei is the author of Peter and the Wolves, a short memoir of her rock and roll education.

Why Labelle Matters is a bracing treasure trove of pop revelation...If your main impression of Patti Labelle comes from the overproduced studio versions of her later solo hits, and your knowledge of Labelle, the group, is limited to 'Lady Marmalade', this punchy little volume will open your ears to a progressive past that still sounds like the future.
— Passport Magazine

[Why Labelle Matters] not only chronicles the group’s history but demonstrates, as the title suggests, why their music was and is so important.
— Please Kill Me