Leg Over Leg: Volumes One and Two (Library of Arabic Literature #1) (Abridged / Paperback) 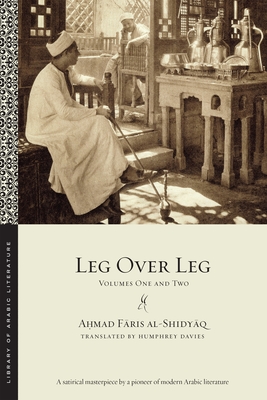 This is book number 1 in the Library of Arabic Literature series.

Leg over Leg recounts the life, from birth to middle age, of "the Fariyaq," alter ego of Ahmad Faris al-Shidyaq, a pivotal figure in the intellectual and literary history of the modern Arab world. The always edifying and often hilarious adventures of the Fariyaq, as he moves from his native Lebanon to Egypt, Malta, Tunis, England, and France, provide the author with grist for wide-ranging discussions of the intellectual and social issues of his time, including the ignorance and corruption of the Lebanese religious and secular establishments, freedom of conscience, women's rights, sexual relationships between men and women, the manners and customs of Europeans and Middle Easterners, and the differences between contemporary European and Arabic literatures, all the while celebrating the genius and beauty of the classical Arabic language. Volumes One and Two follow the hapless Fariyaq through his youth and early education, his misadventures among the monks of Mount Lebanon, his flight to the Egypt of Muhammad 'Ali, and his subsequent employment with the first Arabic daily newspaper--during which time he suffers a number of diseases that parallel his progress in the sciences of Arabic grammar, and engages in amusing digressions on the table manners of the Druze, young love, snow, and the scandals of the early papacy. This first book also sees the list--of locations in Hell, types of medieval glue, instruments of torture, stars and pre-Islamic idols--come into its own as a signature device of the work. Akin to Sterne and Rabelais in his satirical outlook and technical inventiveness, al-Shidyaq produced in Leg over Leg a work that is unique and unclassifiable. It was initially widely condemned for its attacks on authority, its religious skepticism, and its "obscenity," and later editions were often abridged. This is the first complete English translation of this groundbreaking work.

Aḥmad Fāris al-Shidyāq (Author) Aḥmad Fāris al-Shidyāq (1805 or 1806-1887) was a foundational figure in modern Arabic literature. Born to a prominent Maronite family in Lebanon, al-Shidyāq was a pioneering publisher, poet, essayist, lexicographer and translator. Known as the father of Arabic journalism, al-Shidyāq played a major role in reviving and modernizing the Arabic language. Humphrey Davies (Translator) Humphrey Davies is an award-winning translator of some twenty-five works of modern Arabic literature, among them Alaa Al-Aswany's The Yacoubian Building, five novels by Elias Khoury, including Gate of the Sun, and Aḥmad Fāris al-Shidyāq's Leg over Leg. He has also made a critical edition, translation, and lexicon of the Ottoman-period Brains Confounded by the Ode of Abū Shādūf Expounded by Yūsuf al-Shirbīnī, as well as editions and translations of al-Tūnisī's In Darfur and al-Sanhūrī's Risible Rhymes from the same era. In addition, he has compiled with Madiha Doss an anthology in Arabic entitled Al-ʿāmmiyyah al-miṣriyyah al-maktūbah: mukhtārāt min 1400 ilā 2009 (Egyptian Colloquial Writing: selections from 1400 to 2009) and co-authored, with Lesley Lababidi, A Field Guide to the Street Names of Central Cairo. He read Arabic at the University of Cambridge, received his Ph.D. from the University of California at Berkeley, and previous to undertaking his first translation in 2003, worked for social development and research organizations in Egypt, Tunisia, Palestine, and Sudan. He is affiliated with the American University in Cairo.