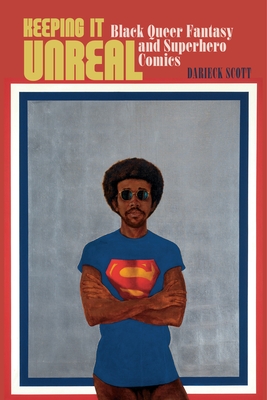 This is book number 58 in the Sexual Cultures series.

Characters like Black Panther, Storm, Luke Cage, Miles Morales, and Black Lightning are part of a growing cohort of black superheroes on TV and in film. Though comic books are often derided as na ve and childish, these larger-than-life superheroes demonstrate how this genre can serve as the catalyst for engaging the Black radical imagination. Keeping It Unreal: Comics and Black Queer Fantasy is an exploration of how fantasies of Black power and triumph fashion theoretical, political, and aesthetic challenges to--and respite from--white supremacy and anti-Blackness. It examines representations of Blackness in fantasy-infused genres: superhero comic books, erotic comics, fantasy and science-fiction genre literature, as well as contemporary literary "realist" fiction centering fantastic conceits. Darieck Scott offers a rich meditation on the relationship between fantasy and reality, and between the imagination and being, as he weaves his personal recollections of his encounters with superhero comics with interpretive readings of figures like the Black Panther and Blade, as well as theorists such as Frantz Fanon, Eve Sedgwick, Leo Bersani, Saidiya Hartman, and Gore Vidal. Keeping It Unreal represents an in-depth theoretical consideration of the intersections of superhero comics, Blackness, and queerness, and draws on a variety of fields of inquiry. Reading new life into Afrofuturist traditions and fantasy genres, Darieck Scott seeks to rescue the role of fantasy and the fantastic to challenge, revoke, and expand our assumptions about what is normal, real, and markedly human.

Darieck Scott is Assistant Professor of African American studies at the University of California-Berkeley. He is the author of the novels Hex and Traitor to the Race, and the editor of Best Black Gay Erotica.