Hands Up, Don't Shoot: Why the Protests in Ferguson and Baltimore Matter, and How They Changed America (Paperback) 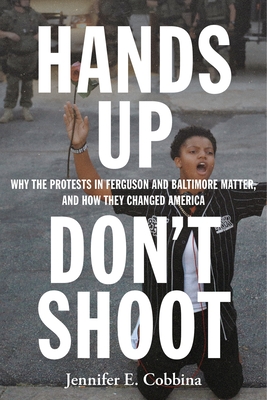 Following the high-profile deaths of eighteen-year-old Michael Brown in Ferguson, Missouri, and twenty-five-year-old Freddie Gray in Baltimore, Maryland, both cities erupted in protest over the unjustified homicides of unarmed black males at the hands of police officers. These local tragedies-and the protests surrounding them-assumed national significance, igniting fierce debate about the fairness and efficacy of the American criminal justice system. Yet, outside the gaze of mainstream attention, how do local residents and protestors in Ferguson and Baltimore understand their own experiences with race, place, and policing? In Hands Up, Don't Shoot, Jennifer Cobbina draws on in-depth interviews with nearly two hundred residents of Ferguson and Baltimore, conducted within two months of the deaths of Brown and Gray. She examines how protestors in both cities understood their experiences with the police, how those experiences influenced their perceptions of policing, what galvanized Black Lives Matter as a social movement, and how policing tactics during demonstrations influenced subsequent mobilization decisions among protesters. Ultimately, she humanizes people's deep and abiding anger, underscoring how a movement emerged to denounce both racial biases by police and the broader economic and social system that has stacked the deck against young black civilians. Hands Up, Don't Shoot is a remarkably current, on-the-ground assessment of the powerful, protestor-driven movement around race, justice, and policing in America.