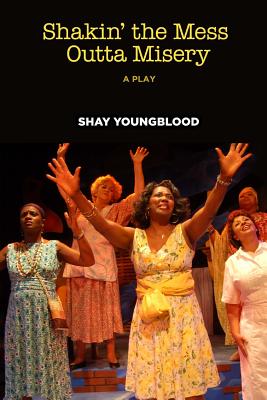 Shakin' the Mess Outta Misery is the story of a young black girl's coming of age in the South in the 1960s. Daughter, the main character and 25-year-old narrator whose mother died when she was very young, was raised by women in the community, some blood related, some not. When she was 12 years old she began her journey to womanhood guided by these very diverse, non-traditional, older black women. Daughter begins the play as an adult reflecting on the summer of her 12th year in the now empty house of her childhood. She shares with the audience how her Big Mamas prepared her for womanhood. As she remembers, the women enter to tell their stories and Daughter becomes a child again reliving her vivid memories of growing up--recalling the rituals, the faith healings, the stories she was told and the lessons she learned about survival, healing, deep faith and mystery. The Washington Post said Shakin' the Mess Outta Misery "...is a vivid portrait of the members of a tight knit community of African American women...heartfelt and definitely a memory play, but it goes about its business in unpredictable and emotionally satisfying ways...First and foremost is Youngblood's evocative language, which blends the poetic and the everyday into a potent stew of exclamations and descriptions, oaths and jive...Some scenes] are funny, some melancholy, some deadly serious, but all burst with detail, eccentricity and truth.