What We Devour (Paperback) 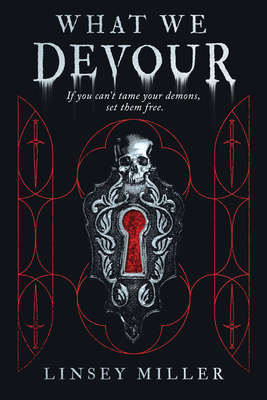 The eat-the-rich, deliciously dark fantasy you've been waiting for.

A girl with the power of the banished gods must bind herself to a wicked Prince to save her crumbling world, as the poor are sacrificed to save the rich.

Lorena Adler has a secret—she holds the power of the banished gods, the Noble and the Vile, inside her. But she has spent her entire life hiding from the world and her past. Lorena's content to spend her days as an undertaker in a small town, marry her best friend, Julian, and live an unfulfilling life so long as no one uncovers her true nature.

But when the notoriously bloodthirsty and equally Vile crown prince comes to arrest Julian's father, he immediately recognizes Lorena for what she is. So, she makes a deal—a fair trial for her betrothed's father in exchange for her service to the crown.

The prince is desperate for her help. He's spent years trying to repair the weakening Door that holds back the Vile…and he's losing the battle. As Lorena learns more about the Door and the horrifying price it takes to keep it closed, she'll have to embrace both parts of herself to survive.

"Anyone who reads Linsey Miller knows that her worldbuilding, characters, and tense plot lines make for some of the best dark fantasy novels in the YA genre."—Brianna Robinson, The Young Folks

This heart-pounding YA story of magic and danger is perfect for readers looking for:

A wayward biologist from Arkansas, Linsey previously worked as a crime lab intern, neuroscience lab assistant, and pharmacy technician. She can be found writing about science and magic anywhere there’s coffee. She is the author of the Mask of Shadows duology, Belle Revolte, and What We Devour. Visit her online at linseymiller.com.

"A triumphant dark fantasy, What We Devour serves up an incredibly smart magic system with a side of eat-the-rich energy. Perfect for fans of Wicked Saints and anyone who likes their romances equal parts swoony and stabby. This is my favorite Linsey Miller book" — Rosiee Thor, author of Tarnished Are the Stars

"What We Devour has my new favorite magic system. Miller pulls no punches in a stark examination of class structures and the consequences of conflating worth and wealth set against the backdrop of a post-apocalyptic fantasy world. With a cunning main character and visceral prose that will leave you haunted, this book is a dark delight." — Kalyn Josephson, author of The Storm Crow duology

"What We Devour is a brilliant and bloodthirsty read that pulls no punches, makes us question all of our actions, and begs us to find a way to change the world." — Laura Pohl, author of The Last 8 duology

"WHAT WE DEVOUR is a twisting, complex puzzle box, effortlessly weaving sinister bargains, deadly magic, and the ethics of power and sacrifice. With an unforgettable cast and themes achingly relevant to today's readers, this book is not to be missed." — Margaret Owen, author of The Merciful Crow duology

"Dark, mesmerizing and wildly original, What We Devour is a captivating fantasy you won’t be able to put down." — Andrew Shvarts, author of The Royal Bastards trilogy

"Dark, mesmerizing and wildly original, What We Devour is a captivating fantasy you won’t be able to put down." — Andrew Shvarts, author of The Royal Bastards trilogy

"Excellent asexual representation in Lorena, rich worldbuilding, political intrigue, and a cast of prickly, passionate characters round out the satisfyingly complex plot. Particularly masterful are the shifts in Lorena’s narrative perspective that reflect the sacrifices of significant memories...Mind-bending and incisive." — Kirkus Reviews

"[Lorena is] undeniably intriguing, and she’s admirable in her ownership of her asexuality." — The Bulletin of the Center for Children's Books

"Anyone who reads Linsey Miller knows that her worldbuilding, characters, and tense plot lines make for some of the best dark fantasy novels in the YA genre." — Brianna Robinson, The Young Folks

"I’m ready to devour the second installment in this apocalyptic fantasy series." — Kayla Webb, The Tempest

"What We Devour is one of those magnificently atmospheric and character-driven books with a plot that needs to be experienced." — Jodi Scaife, Fanbase Press

"Dark, atmospheric, and consuming, WHAT WE DEVOUR is a thrilling and thought-provoking YA fantasy read that will leave the reader reeling." — YA Books Central