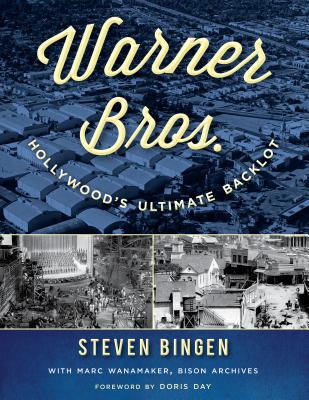 By Steven Bingen, Marc Wanamaker (With), Doris Day (Foreword by)
$24.95
Possibly out of print. Email or call to check availability and price.

Movie studios are the wondrous, almost magical locales where not just films, but legends, are created. Unfortunately, these celebrity playgrounds are, and always have been, largely hidden from public view. Although some movie studios offer tours, few guests from outside the Hollywood community have ever been witness to the artistry, politics, and scandals that routinely go on behind the soundstage walls and away from the carefully orchestrated scenes visible to them from their tram carts. In this book, studio staff historian and Hollywood insider Steven Bingen throws open Hollywood's iron gates and takes you inside the greatest and yet most mysterious movie studio of them all: Warner Bros. Long home to the world's biggest stars and most memorable films and television shows, the Warner Bros. Studio lot functions as a small city and is even more fascinating, glamorous, and outrageous than any of the stars or movies that it has been routinely minting for more than ninety years. Accompanied by stunning behind-the-scenes photos and maps, and including a revealing backstory, this book is your ticket to a previously veiled Hollywood paradise.

Steven Bingen is a historian, screenwriter, and former archivist at Warner Bros. Originally a native of Seattle, Bingen has written and contributed to dozens of books, articles, and documentaries on Hollywood history. He coauthored MGM: Hollywood's Greatest Backlot, the first significant book ever published about a movie studio lot. He lives in the world's largest backlot, also known as Los Angeles.