Storied & Scandalous Charleston: A History of Piracy and Prohibition, Rebellion and Revolution (Paperback) 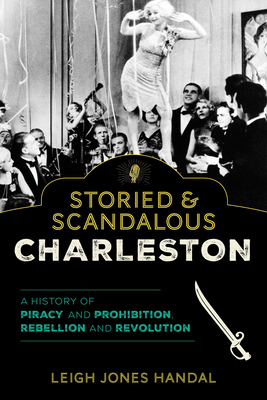 Quaker William Penn once described Charles Town as "a hotbed of piracy," full of wayward women "who frequented a tap room on The Bay and infected a goodly number of the militia with the pox." Since the Carolina Colony was founded and named for Charles II, the Merry Monarch, it's no surprise that Charlestonians have always had a flair for flouting the rules. In the 18th century, Bostonian Josiah Quincy complained that Charlestonians, "are devoted to debauchery and probably carry it to a greater length than any other people." In Storied & Scandalous Charleston, storyteller Leigh Jones Handal weaves tales of piracy, rebellion, ancient codes of honor, and first-hand accounts of the madness that ensued as the city fell first to the British in 1780 and then to the Union in 1865. Meet some of the foremost female criminals of the day--lady pirate Anne Bonny and highwaywoman Livinia Fisher. And learn how centuries of war, natural disasters, bankruptcy, and chaos shaped modern Charleston and the Carolina Low Country.

A native South Carolinian, Leigh Jones Handal has been an avid student of Lowcountry history since she was a Brownie Scout. A graduate of the College of Charleston with an MA degree in journalism from the University of South Carolina, Leigh has been a licensed city tour guide for more than 20 years and owns her own company, Charleston Raconteurs (charlestonraconteurs.com). She served as director of Public Programs at Historic Charleston Foundation (1998-2010), and co-edited the city's official history and tour guide training manual, released in 2011. She is also the author of Lost Charleston (Pavilion, 2019). She created and appears regularly on Lowcountry Live's "I Love the Lowcountry" series (WCIV-TV4).