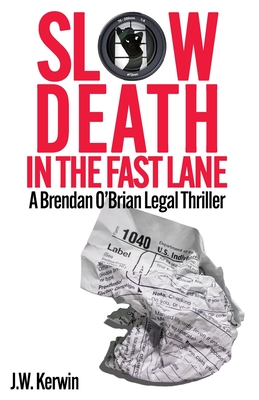 If you hate the IRS, you'll love this book

Years of creative accounting have landed Harvey Berkowitz in court, charged with criminal tax fraud. The government has a mountain of incriminating evidence and what appears to be an airtight case. But Harvey has Brendan O'Brian, an unconventional defense attorney with a reputation for winning seemingly unwinnable cases.

O'Brian turns the tables on the government, putting the Tax Code and predatory IRS practices on trial with strategies that create a circus-like atmosphere in the normally staid federal court.

Chaos reigns outside the courtroom as well. O'Brian is mugged twice in less than a week, shadowed by a man who is officially dead, and harassed by local cops. But his biggest distraction is news that his wife has hired someone to kill him.

Surrounded by a cast of unforgettable characters, including a seemingly senile law partner and a colorful client nicknamed Eddie the Skunk, O'Brian must determine which events outside the courtroom are connected to the Berkowitz trial, an unrelated case involving a ruthless politician, or his wife's contract on his life.

Although a work of fiction, the book discloses some very real truths about a government agency that has recently been embroiled in controversy. For example, at one point in the trial O'Brian details the workings of a little known IRS sting operation that targets small businesses.

And in the particularly entertaining chapter entitled "Dean Wormer must be running the IRS," an expert witness uses the "double secret probation" scene from the iconic National Lampoon's Animal House to explain why the Internal Revenue Code violates constitutionally mandated due process requirements.

On the surface, Slow Death in the Fast Lane is a fast-paced, entertaining and frequently amusing legal thriller. But read between the lines and you'll find a damning denunciation of a government agency that many people believe is far too powerful.

J.W. Kerwin practiced law in New Jersey in the 1980s. He now lives in a secure, undisclosed location with his wife and cat where he spends his time preparing for the retaliatory audit that's sure to happen when someone at the IRS reads this book.