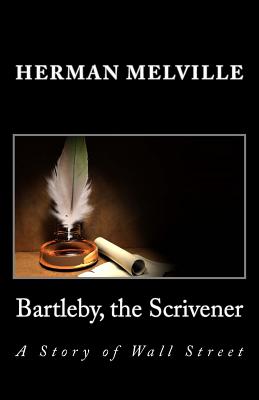 Bartleby the Scrivener: A Story of Wall Street is a short story by Herman Melville, published anonymously in 1853 in Putnam's Monthly Magazine. It was collected in his 1856 volume The Piazza Tales. Herman Melville wrote this story in 1853, two years after Moby Dick had been published and his writing career was beginning to lose its luster. Subtitled, "A Story of Wall Street", it is a seemingly simple story about a lawyer who hires a gentleman named Bartleby as a scrivener in his office. This was way back in the days before photocopy machines and scriveners performed the necessary tasks of tediously hand copying documents over and over. Bartleby was good at the copying part of his job, but when asked to proofread aloud one day he simply replied, "I prefer not to." From that moment forward, he used the phrase "I prefer not to" for every task requested of him, eventually "preferring not to" do any work whatsoever. The lawyer, who is astounded by Bartleby's attitude, tells the story in the first person. The story is rich in language and yet spare in actual action. The reader is forced to think, and think seriously about the choices we make daily. Bartleby chose to rebel and become an anti-hero. But the real protagonist of the story is the lawyer, who is drawn into Bartleby's power and grows to admire him. The conclusion is sad, but inevitable.

Herman Melville (1819 -1891) was an American novelist, short story writer, essayist, and poet. He is best known for his novel Moby-Dick and the posthumous novella Billy Budd. His first three books gained much contemporary attention (the first, Typee, becoming a bestseller), but after a fast-blooming literary success in the late 1840s, his popularity declined precipitously in the mid-1850s and never recovered during his lifetime. When he died in 1891, he was almost completely forgotten. It was not until the "Melville Revival" in the early 20th century that his work won recognition, especially Moby-Dick which was hailed as one of the literary masterpieces of both American and world literature. He was the first writer to have his works collected and published by the Library of America.