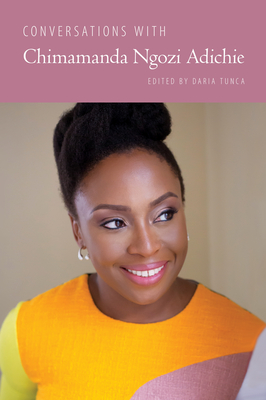 Nigerian author Chimamanda Ngozi Adichie (b. 1977) is undoubtedly one of the most widely acclaimed African writers of the twenty-first century. Best known for her insightful fiction, viral TED talks, and essays on feminism, she is also a notoriously outspoken intellectual. As she puts it in an interview with Lia Grainger, in her characteristically straightforward style: "I have things to say and I'll say them."

Conversations with Chimamanda Ngozi Adichie is the first collection of interviews with the writer. Covering fifteen years of conversations, the interviews start with the publication of Adichie's first novel, Purple Hibiscus (2003), and end in late 2018, by which time Adichie had become one of the most prominent figures on the international literary scene. As both scholars and passionate readers of the author's work are bound to find out, the opinions shared by Adichie in interviews over the years coalesce into a fascinating portrait that presents both abiding features and gradual transformations.

Reflecting the political and emotional scope of Adichie's work, the conversations contained in this volume cover a wide range of topics, including colonialism, race, immigration, and feminism. Collectively, these interviews testify both to the author's ardent wish to strive for a more just and equal world, and to her deep interest in exploring our common humanity. As Adichie says in her 2009 interview with Joshua Jelly-Schapiro: "When people call me a novelist, I say, well, yes. I really think of myself as a storyteller." This book invites Chimamanda Ngozi Adichie to tell her own literary story.