Nichols and May: Interviews (Conversations with Filmmakers) (Paperback) 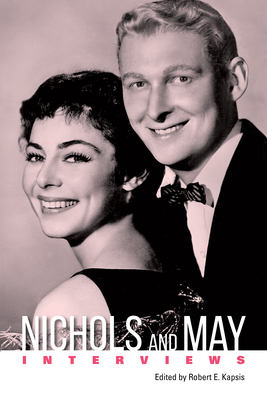 Have The Heartbreak Kid and Ishtar been remastered/released yet? Can't we just throw all of Miss May's movies into a boxset and call it a day? I mean, how hard can it be?

In the late 1950s, Mike Nichols (1931-2014) and Elaine May (b. 1932) soared to superstar status as a sketch comedy duo in live shows and television. After their 1962 breakup, both went on to long and distinguished careers in other areas of show business--mostly separately, but sporadically together again. In Nichols and May: Interviews, twenty-seven interviews and profiles ranging over more than five decades tell their stories in their own words. Nichols quickly became an A-list stage and film director, while May, like many women in her field, often found herself thwarted in her attempts to make her distinctive voice heard in projects she could control herself. Yet, in recent years, Nichols's work as a filmmaker has been perhaps unfairly devalued, while May's accomplishments, particularly as a screenwriter and director, have become more appreciated, leading to her present widespread acceptance as a groundbreaking female artist and a creative genius of and for our time. Nichols gave numerous interviews during his career, and editor Robert E. Kapsis culled hundreds of potential selections to include in this volume the most revealing and those that focus on his filmmaking career. May, however, was a reluctant interview subject at best. She often subverted the whole interview process, producing instead a hilarious parody or even a comedy sketch--with or without the cooperation of the sometimes-oblivious interviewer. With its contrasting selection of interviews conventional and oddball, this volume is an important contribution to the study of the careers of Nichols and May.

Robert E. Kapsis is professor emeritus of sociology and film studies at Queens College and the Graduate Center of the City University of New York. He is author of Hitchcock: The Making of a Reputation and editor of several volumes in the Conversations with Filmmakers Series.